Hello @babissak12 , this is a great question that has a very detailed answer. Besides our answers here, I’d also recommend you to review the literature with keywords: RANS, turbulence models, eddy viscosity, eddies, DNS, LES.

Turbulent (Eddy) viscosity is an artificial term used in Reynolds Averaged Navier Stokes (RANS) equations to account for the reduction in turbulent due to rotational effects (vortices). As the name suggest, RANS equations are time-averaged equations that should be used when you don’t need instantaneous properties of the flow. 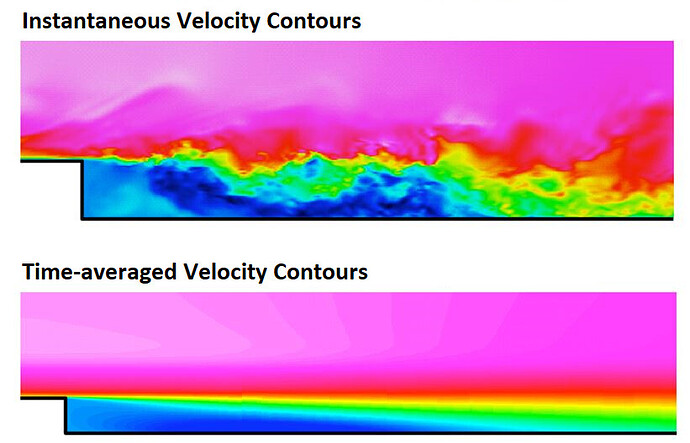 As you’ll see on the figure above, RANS (time-averaged velocity contours) tends to model the turbulence(chaotic flow) instead of simulating it, which is usually done in LES and DNS approaches. To compansate the reduction in turbulent flows influence, an artificial diffusion term is produced by the turbulence models: Turbulent (Eddy) viscosity.

In your solution field you’ll see that there is a region far from the wing wall that almost has a constant turbulent kinematic viscosity. Turbulent viscosity within freestream region is calculated based on the turbulent kinetic energy and specific dissipation rates defined in boundaries. (In this case it’s defined by using the inital conditions when a velocity inlet boundary condition is used) Turbulence models will have no influence on the turbulent viscosity within the freestream region since they are only activated at a finite difference downstream of the walls. In case you want to learn more about initial values of turbulent quantities, here is a detailed post on the Forum which may be helpful.

Looking at another application by using the compare tool, here a wing configuration is simulated in two different angle of attacks (0 and 10 degrees).

In general, it’s completely up to you how you plot the contours. In this case I would prefer cutting planes and vectors to examine flow seperation near trailing edges. In case you plot turbulent viscosity contours on streamlines, it’s likely that you’ll observe higher values around streamlines with high curvature.

Hope these are helpful,
Kaan.