After a test of only the Rear Wing, using the following settings, it seems that the region refinement effected the surface refinement level by lowering it back down to level 6.

Another problem is just this rear wing mesh has 7.6 million cells - waay too much 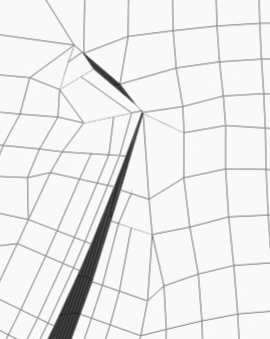 I have also tried no region refinements, with a high level change between cells, but that resulted in the wing not even being meshed.

I am also trying just one universal boundary layer inflation, and will also try having the smaller faces with unequal level refinements.

Can you give me a direct link to the RW test 1.1 mesh?

Sorry i just made it so i forgot to share /make it public. here it is

Dale, are you sure that the final thickness ratio is related to the surface refinement and not the region refinement cell sizes?

Either way, i am not getting the results i want, which is to have the mesh retain smaller cell sizes when i assign higher level surface refinements to specific faces, otherwise i am getting jagged edges. What is interesting is that in the whole model mesh i made, they did, the surface refinement size DID mesh to a higher level.

I am not sure what to do from here as i cant yet even test the Y+ changes i wanted. Would you reccomend sending some meshes through to simulation to see the Y+ values anyways.?

Just a quick look at two sims i did of the Rear Wing test. The best meshing results so far are from test 1.1 and test 1.6. A comparison can be made of the Y+ results and it seems that the absolute layering of test 1.6 covers a bit better. However on both tests the forces and moments resulted in odd numbers for the pressure forces. Not sure if I made a mistake in some settings.

Only changes to Region refinements 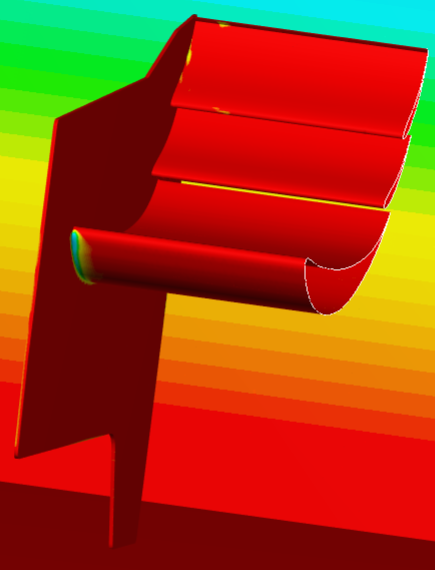 Now that the holidays are over, I will try to catch up to you…

I spent the whole day working on issues that have come up in this topic.

I have a lot to report…

I will start by quoting and responding quite a bit, so here goes ‘Quote and Response’ #1:

However on both tests the forces and moments resulted in odd numbers for the pressure forces. Not sure if I made a mistake in some settings.

This is a huge problem, if your results are not making sense ! To properly see yPlus surface values, your sim run must be pretty well converged. Yours are not… Also, a ‘wings only’ yPlus investigation is a bit meaningless since the air flowing to the wings will not have been disturbed by the body of the car. Use the ‘wings only’ as just a test of how to get yPlus values that you seek… Only after the wings have been added to the body can you make the final yPlus tweaking…

If you use Potential Foam Initialization, it will converge 3 or 4 time faster… I have a test running now to 5000 iterations with PotInitON…. I also added a ‘Coefficients’ results with a 1m reference length and a 1m^2 area… It is MUCH easier to see if the CL and CD are becoming stable than when the various pressure and viscous forces get stable… I will stop it when the CL and CD are about 1% stable over 500 iterations, THEN we can look at yPlus

AND FOR THE FIRST TIME IN PUBLIC, HERE IS MY ORSI by Moving Average Output screen that showed me when to stop that sim run

)
.
.
.
AND here is the converged flow pattern in your domain at y=0 (that now makes sense to me 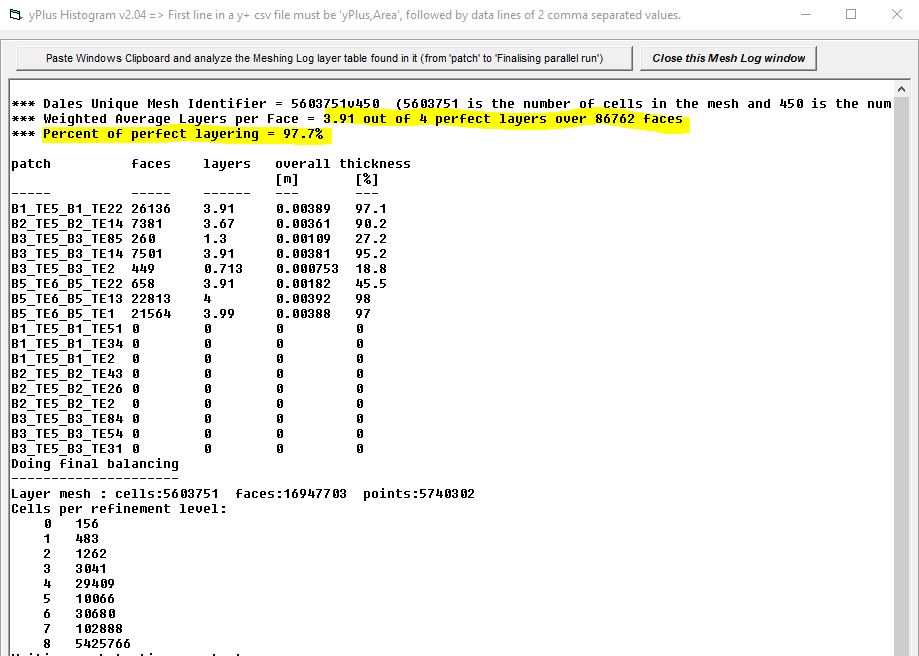 RWtest16_LayerTableAnalysis.JPG919x656 93.9 KB
.
.
.
AND here is the yPlusHistogram for the results of the now well converged sim run: 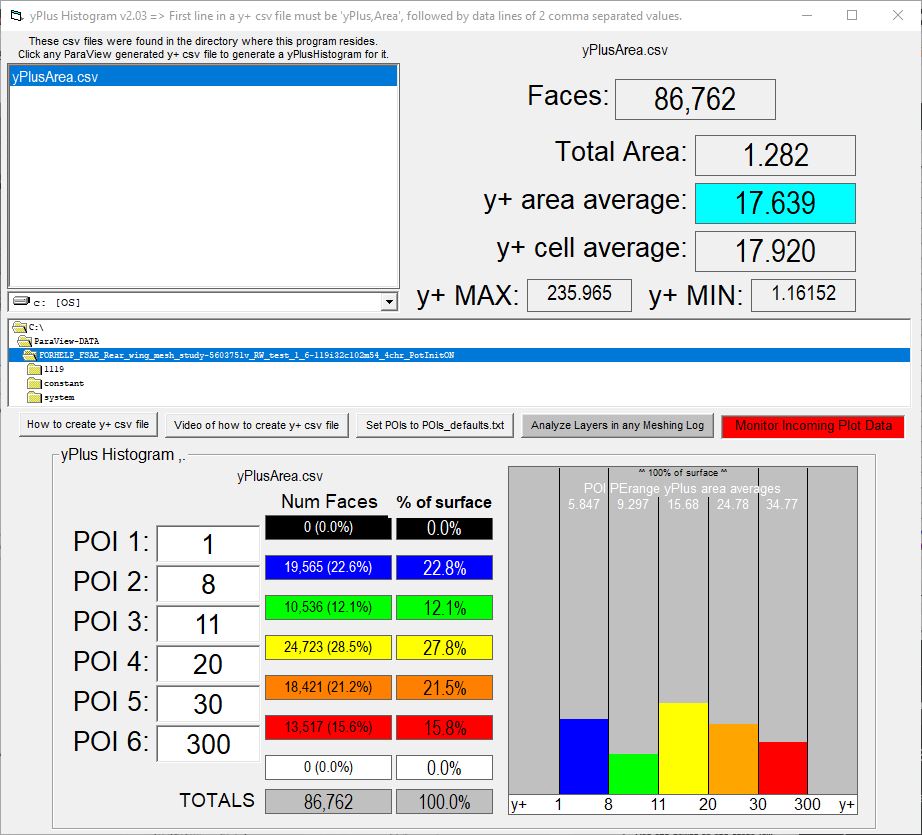 Just to be able to see the need for a more complete convergence before the yPlus should have been looked at, here are the ‘Not well converged’ residual and force plots:

HOLY mother of Dale! this is amazing.

First off I hope you still know that this much help is not required of you. I appreciate it more then you know, but I do not want you to have to invest so much your time doing sim runs and analyzing everything. for me. This level of expertise is way beyond what i could have asked for and could have expected, especially when you are getting nothing in return. You should be paid for these services.

I assume you are doing this because you enjoy it but i will not be offended if you jump out completely at any time.
(end of rent)

Getting on to your response:

To properly see yPlus surface values, your sim run must be pretty well converged. Yours are not… Also, a ‘wings only’ yPlus investigation is a bit meaningless since the air flowing to the wings will not have been disturbed by the body of the car. Use the ‘wings only’ as just a test of how to get yPlus values that you seek… Only after the wings have been added to the body can you make the final yPlus tweaking…

I did these two sim runs for two reasons;

I definetly need to start with the post processing in Paraview, the amount you can do with this is impressive.

NOW, is this what you EXPECTED for your ‘RW test 1.6’ yPlus values (theoretically, below 20 is not so good for wall function use)

To be honest im not quite yet at the point of deciding to fine tune the Y+ settings through the boundary layer refinement. Im much farther behind you, where i am still trying to get the mesh to do what i want.

My main goal for these simulations, is to have decent mesh quality with low cell count. I am still stuck on:

the only was i know of having higher region refinement levels next to the wing surface is to make many cartesian boxes. (the need for higher level region refinements is killing my total cell count.

I think that different levels on large vs small faces is not crucially important to increasing the cell count over mall areas but having super small cells on large surfaces (mono) is not needed and would effect this number. I seem to be having trouble getting different surface refinement levels even though i am telling each refinement to be different. The level 6 endplate main face is forced to increase its level even though i am not telling it to in the surface refinement. I think this is due to the region refinement being higher and forcing it to increase also. This is another problem i need solved. Once i can control these factors it will allow me to apply the mesh strategy to the whole car and i can get the quality and total cell count i require.

Once this is done, i can focus on Y+ settings and eventually understanding the simulation settings.

the only was i know of having higher region refinement levels next to the wing surface is to make many cartesian boxes. (the need for higher level region refinements is killing my total cell count.

No way! i had already tests (which i think i deleted) without cartesian boxes. I had just increased the cells between layers t like 6 or 7 on one test and to 10 (the level distance between level 0 and my wing surface level) and i got the same results as you. Nothing showing up. Ideally my perfect mesh solution would have no boxes except for wake regions so that the cells could simply be reduced when they are a certain distance to the geometry. This would help a ton in terms of cell count and i could maybe if im lucky increase surface the refinement level on everything.

If this works as i envision it, along with possible absolute layering, i think this could work for my application needs!

I have also tried no region refinements, with a high level change between cells, but that resulted in the wing not even being meshed.

WAY BACK HERE WHEN YOU MADE THAT STATEMENT A WEEK AGO, I STARTED INVESTIGATING THE STRANGE ISSUE…

Also, you need to discover the ‘Distance to surface’ region refinement… I am using it on the CyberTruck mesh now…

Oh my gosh this is a game changer

Also, you need to discover the ‘Distance to surface’ region refinement… I am using it on the CyberTruck mesh now…

I had known about this feature i just applied it to cartesian boxes. I never saw that it could be applied to the geometry. I feel so dumb, because this would have saved me a lot of frustration and mesh trials. Oh well, now a new round of meshes can be made and hopefully i can figure out how to get a good mesh.

Another side note about the pictures above. I do not like the leading edge on the element wing at all. It is extremely jagged. I am pretty sure that increasing the surface refinement level will not hlep here because the STL file size is too small. Currently I believe that it is at 0.013m but saving this again at a higher level will help. Another piece to this puzzle.

On a side note. I think i have made my decision, at least for wing surfaces, on the Y+ vlaue. After observing the meshes on the symmetry plane from the Rear wing, I have noticed that creating a boundary layer that has a max Y+ value over a certain amount, starts to warp the cells between the main and element wings. Shown below is from test 1.6 which is ok. if the boundary layer cells from both wings is too large Shown in seccond pic. Either the cells will distort too much or they will touch which i assume is no good. 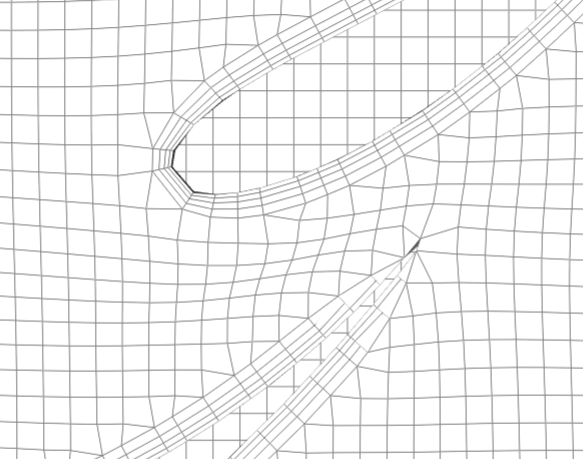 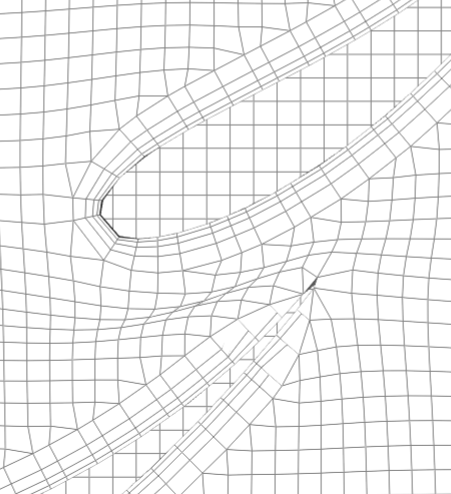 As usual a lot to do and even more learned as the testing continues. Pumped to do this next round. I think im getting close.

Also, try to stick with EXACTLY 1 meter Level 0 cell size in all axes… I even generally make my BMB locations exactly on 1 meter steps…

Just to be sure you understand the trick, your Feature refinement that makes the mesh appear with be to 0.5mm which is the TE thicknesses…

You also need to make the mesh finer on your leading edges to smooth them out: 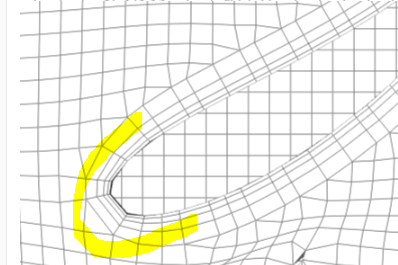 (I would like to see those weird cells in a 3D viewer): 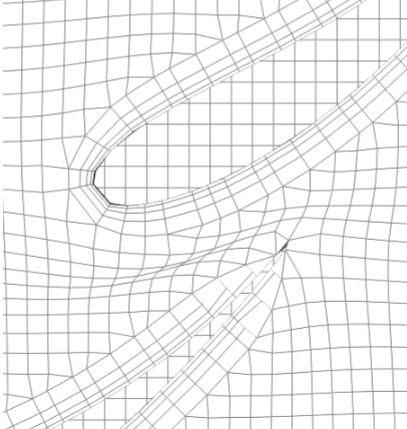 .
.
.
.
Also, I have isolated another issue where meshing fails with a Floating Point Exception error when either an Inside Cartesian Box region refinement OR a Distance from surface face Region refinement is added around a geometry to increase mesh fineness around the vehicle…

Dale, this picture is from test 1.1. It is in the Rear wing test project i shared before but here it is again.

I am working on more tests now and am making good progress, will show the results soon

Great…
By the way, you can copy the browser link when you are on any tree item to send me right to the test 1.1 mesh, like this.

Ok Dale, i havent done one of these yet but i assume this is how it works …Just for you

I took a mesh clip half way out to the endplate and they are less squished but you should worry about squished cells, these are OK but later you would see bad ones in the mesh quality metrics at the end of the mesh log… (views at symmetry plane are always worse looking for layering collapses and squished cells): 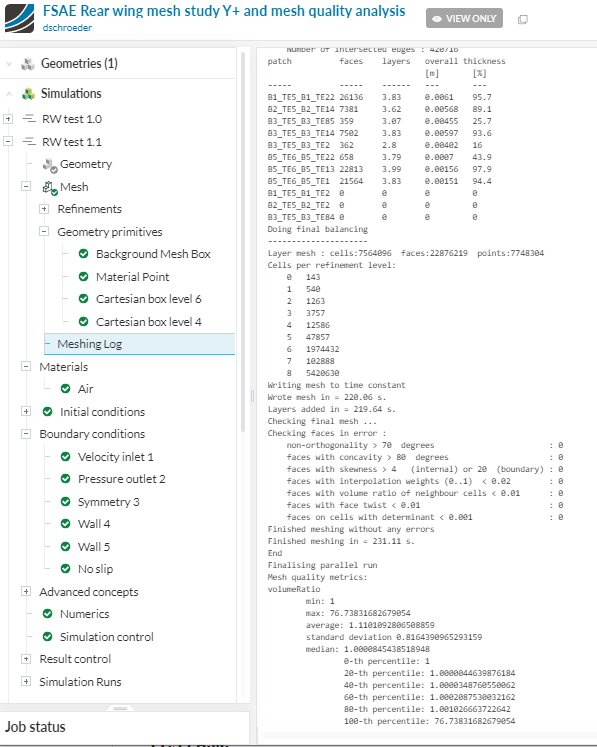