Increasing the chance of convergence: Treatement of Non-orthogonality with solvers and relaxation factors

After doing some research, I complied a small document in order to understand why my simulations are not converging very well, and how the mesh quality effects this convergence ability. Mainly focused on Non-Orthogonality, I attempted to give some advice on how to treat solvers when mesh quality is not very optimal.

The sources of information used:

Improving the quality of finite volume meshes through genetic optimization

Tips and tricks in OpenFOAM

Google Search
Error Analysis and Estimation for the Finite Volume Method with Applications to Fluid Flows by: Hrvoje Jasak

What is Mesh Non-Orthogonality

What is mesh Non-Orthogonality: The Over-Relaxation Approach

Non-orthogonality measures the angle between two faces of the same cell. In a grid with only rectangular cells the value would be zero. Any deviation from this counts as non-orthogonal. 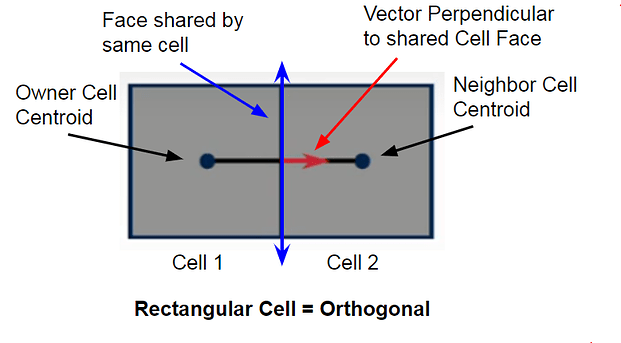 In Example 1, a vector perpendicular to the face shared by both cells creates an angle θ in relation to the vector connecting the cell centroids of the Owner (cell 1) and Neighbor (cell 2). This is the Non-Orthogonality angle. However, in example 2 we can see how this description would cause confusion.Two skewed cells in example 2 show that both the vector d connecting the centroids and the vector n perpendicular to the shared face, are parallel, which would result in an Orthogonal result. These cells however, are clearly not orthogonal to each other, which is why the code uses a second method to define Non-Orthogonality. 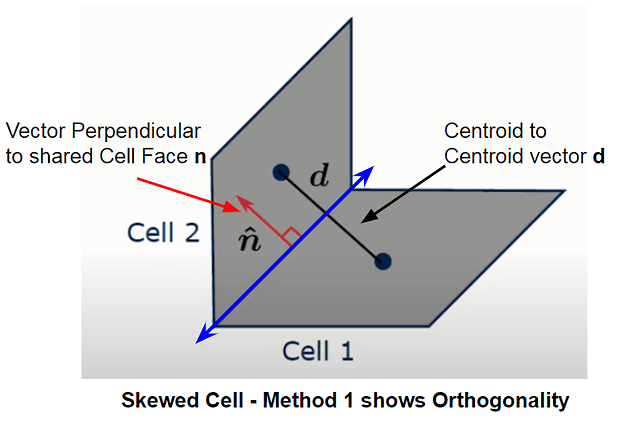 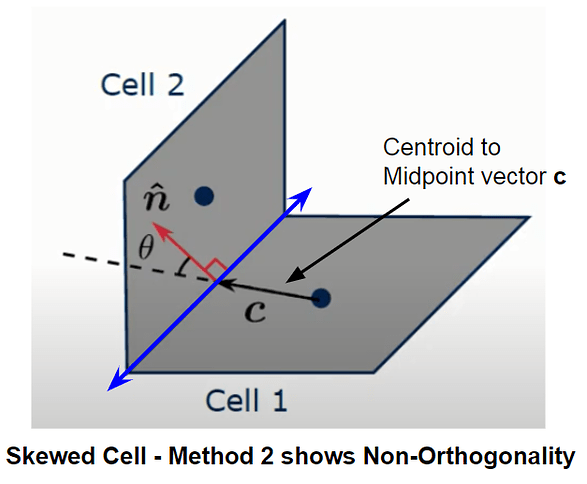 2. Why is Non-Orthogonality important for CFD solvers?

In order to obtain accurate results, we need to consider the finite volume discretization of the diffusion term. I will attempt to avoid the complexities of this topic with an over- generalized, easy to understand explanation for why Non-Orthogonality is important for the solvers.

Let’s take the situation where we have two cells in our mesh with unknown values at the cell centroid shown as Tp and Tn. For this example the unknown value we want to find is Temperature, but this variable can also be calculated with velocity or pressure.Values important to complete these equation and find the temperature are the distance between the centroids and the magnitude of the vector perpendicular to the shared face nf. Since the cells are Orthogonal, nf is parallel to the vector between the centroids, dPN, making the solution very simple.

However, when the cells are Non-Orthogonal, as shown in the next picture, the shared face vector nf creates an angle θ relative to the centroid connection vector dPN. This requires the solver to break down the vector nf into two vector components. One component n1 is created so that it is parallel to the vector dPN while the other component n2 is used as the residual component in the vector decomposition.

There are three ways that Non-orthogonal cells decompose the nf vector.

This method creates a right triangle with vectors n1 and n2. At a low Non-Orthogonality angle θ, the magnitude of n2 is small so stability is not very affected. However, with this method, as θ increases, n2 becomes very large.

This method simply projects the vector nf onto the centroid connecting line dPN where, vector n1 has the same magnitude as nf regardless of the Non-orthogonality angle θ.

In this method, a right triangle is created, with the right angle between nf and n2. As the angle θ increases both n1 and n2 simultaneously increase.

3. Which discretization method is the best?

The most common of these methods is the Over-relaxation method, due to the smaller amount of Non-Orthogonal corretor loops needed for a converged result as shown in the picture below. Since we now know that the value for the Explicit term n2 is taken from the previous iteration (source term), this value lags behind the solution for the Implicit term n1. Therefore, we are required to loop through iterations and update the n2 value, in order to get a converged solution for that Non-orthogonal cell.

Even at higher Non-Orthogonality angles, the Over-relaxed method is able to deliver converged results while the Right angle and Rotation methods start to diverge.

Based on this information, we now know that when our mesh has some quantity of Non-Orthogonal cells, we must apply a certain number of Non-Orthogonal corrector loops in order to achieve a converged solution. From the following PPT, I was able to find a Tips and Tricks guide with the suggested number of loops based on the severity of Non-orthogonality in a mesh.

When the explicit term n2 is very large due to Non-Orthogonality, for example values over 70°, the solver must compensate for the errors of this variable and limit the value of n2 or discard it completely. The solver will then limit the explicit component in order to obtain a value smaller than the implicit component, which improves stability. This is done through the use of Under relaxation factors which are best described by the OpenFOAM user guide

specifies the amount of under-relaxation, ranging from none at all for

and increasing in strength as

. The limiting case where

represents a solution which does not change at all with successive iterations. An optimum choice of

is one that is small enough to ensure stable computation but large enough to move the iterative process forward quickly; values of

as high as 0.9 can ensure stability in some cases and anything much below, say, 0.2 are prohibitively restrictive in slowing the iterative process.

Awesome job Dan! Will read through it ASAP!