I am trying to perform an FEA on the chassis of a drone project I am working on. The drone is constructed in Onshape and I believe it is all mated correctly. I am having some trouble meshing and running a static analysis on the chassis as it is and am not sure if thats due to how I’ve put it together.

I am relatively new to this type of FEA so am still trying to work out if I can run FEA on assemblies as a whole or only individual parts.

Any help would be appreciated!

Hi @Kynan369 and welcome to SimScale!

And yes, you can do a FEA analysis with assemblies.

You can have a look at our Drone Workshop which covers FEA as well as CFD analysis just for the sake of demonstration and in order to get familiar with the User Interface.

As far as I have seen, your model looks symmetric. That means you could only use a quarter of your model and apply a so called Symmetry Boundary Condition on your model to save some core hours and pre-processing time.

If there are any questions from your side, feel free to ask!

Thanks for your swift reply, I’m looking into the Symmetry Boundary Conditions. I’m currently just trying to apply the correct contacts to my model manually but again this will probably be more easily done after it is quartered.

Possibly a silly question but is there a way to “cut” my model along lines of symmetry or will I have to do this in Onshape and then import it again?

I’ll work my way through the tutorial sheets and hopefully they will help me progress a little faster!

and many apologies for the information overlad

Currently there is just scaling and surface splitting (for .stl files) available as geometric operations. So I would recommend splitting your model @ OnShape which shouldn’t be that hard. If you struggle getting it done, I can help you with that.

You can then reimport your model on the platform and continue working with it.

P.S.: A nice blog post I just found regarding CAD models: THREE QUESTIONS TO ASK BEFORE STARTING ANY CAD MODEL

Not to worry I’m sure I will become more able with a few more hours of Youtube/Tutorials!

I’m not sure if there is a specific way of splitting my model in Onshape but I have produced a quarter section and have uploaded this section and am meshing it suitably. With your support on the Symmetry file I think I will be able to start tackling static analysis, the only problem I am still wrestling with is suitably defining my master and slave contacts to accurately model this. If you’re able to lend a hand/advice with this that would be fantastic as there doesn’t appear to be too manny videos on this specifically!

Thanks for all your help so far!

you can use different approaches. One would be to create a plan and use that one as a reference to cut along your symmetry planes (dependent on the symmetry).

Could you share the link with us? I could not find any project in your Dashboard. Maybe you have set it to private.

It would be very useful if you could describe what case you want to simulate (a small sketch or explanation would be awesome). From there we can continue working on the rest.

I have uploaded the link of what I am doing along with this screenshot of the current version of the CAD drone, as you can see I have uploaded the chassis component that I am interested and am trying to perform a Static Analysis on it to see how certain stresses and torsions along this component affect it, this will then be fed-back to Onshape where I can optimise the structure.

Here is a link to my project: https://www.simscale.com/workbench?publiclink=388a2889-43e8-46b9-9139-e32ccb1fdcdf and here are some screenshots of the full assembly so you have an idea of the stresses I am looking into, if you do need a further diagram I’d be happy to upload one. 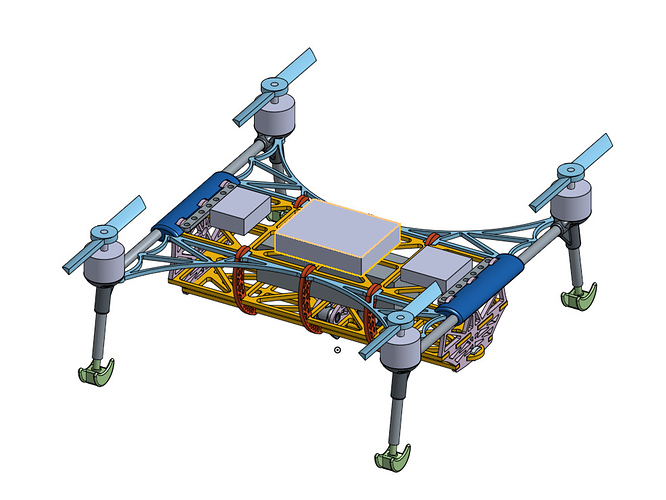 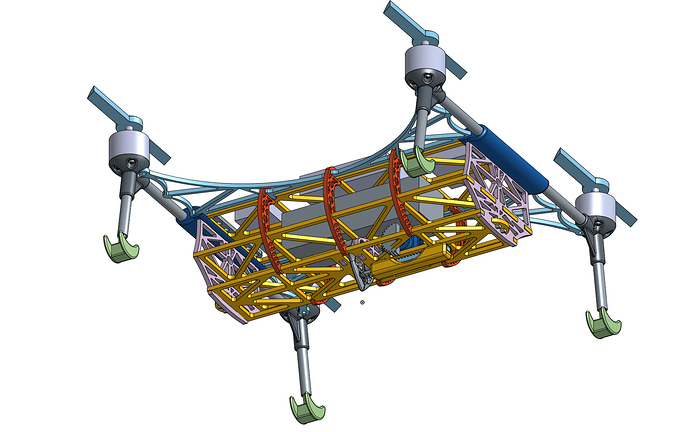 As you can see Im interested in stresses in torsion along the frame as well as the weight stresses from components (jumping in the deep end!) I will also be modelling a drop test of this when I have sufficiently honed my simscale skills!

could you upload a quarter model with the rotor and the other components? It is not necessary but just for the sake of good order and running different cases if required.

Please also have a look at this tutorial from @Milad_Mafi: Drone Workshop - Session 3

Think about some load cases that you want to simulate and add them to your project so that I have a basic idea what kind of loads you are trying to investigate.

The reason I’ve uploaded the quarter model without such components are for a number of reasons. Firstly as you can see the rotors and motors are quite crude and for demonstration only. Secondly the internal components are similarly of a rough dimensional nature and are still being fine tuned through our 3D printer (Although I suspect I will also FEA the claw on the bottom on Simscale shortly).

Another reason is that because of the way the 3D printer prints components I’ve had to dimension the blue bracket so that is is not an accurate fit with the other components when in CAD but when printed is congruent with other components. I think the simulation of the chassis only (being the weakest component) is sufficient as other components are constructed from ABS and Carbon Fibre.

The craft weights an all out weight of 0.7kg, the main components I am looking at though is the battery (the central grey box on the mid panel which weighs 188g, the weight of the electronics on the top platform also totals to around 60g and the grabber on the bottom panel at around 40g. Having made a model of this though I am looking to compute an analysis at the point of maximum acceleration so I am looking at fixing the faces in contact with the bracket and then multiplying the mass of the components by the new constant of gravity accounting for acceleration on each panel and computing that, if that makes sense.

Perhaps I’m approaching this is a rather backwards way and if you have a suggestion of another way to model this then please let me know. My motors have a max thrust of 960g (the calculation is then: ((0.96*4 - 0.7)*9.8)/0.7 which is the resultant thrust for four motors divided by the mass of the craft) this gives an acceleration value of 44 (m/s^2). So I’m planning on multiplying each platform by this value respectively to give the max “weight” if you will.

Let me know what you think and what my next steps should be, I’m slowly going through all the tutorials though.

Thanks for all your help!

sounds good to me! So I would suggest you start with the quarter model you uploaded and set up a first simulation. I will keep track of your progress. As soon as I see any errors or modelling errors in general I will contact you and we can discuss this in more detail. Does that sound good to you?

P.S.: And do not forget to use the skateboard model (“symmetry BC”) and the other resources I posted as an inspiration!