I am new to SimScale and tried the [Conjugate heat transfer – cooling of electronic equipment] Tutorial (https://www.simscale.com/docs/tutorials/conjugate-heat-transfer-cooling-of-electronic-sink/). I followed the steps, but the small chip is causing temperatures over 4000K. 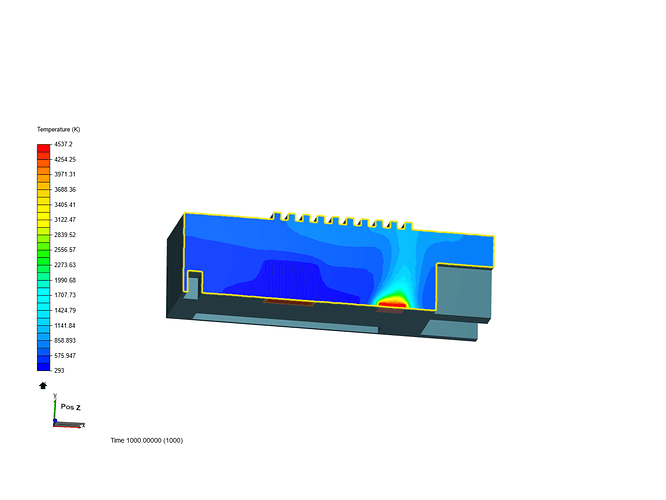 If I delete the absolute power source in the small chip and only power the large chip the result seem plausible. 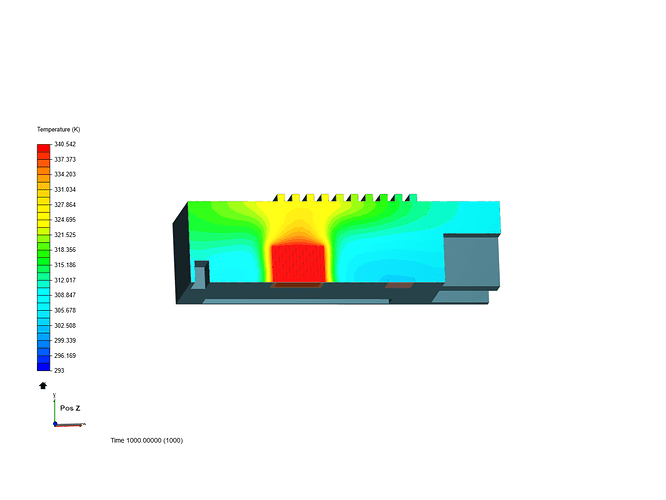 Why is the small chip heating up so much, what did I do wrong?

Can somebody please tell me, why my simulation deviates from all the other ones, where this problem didn’t occur?
my project:
https://www.simscale.com/projects/embers/tutorial_-_conjugate_heat_transfer-_cooling_of_an_electronic_sink_2/

Thanks for letting us know! Will have a look at that later on and let you know what the cause of this is.

Here is the new project with the old runs deleted: https://www.simscale.com/projects/jmrd/fixed_-_conjugate_heat_transfer-_cooling_of_an_electronic_sink/ - BCs were missing & material properties were not set correctly from what I have seen.

If you want to do it again from scratch, please have a look at the tutorial here (in case you have not seen it before): CHT Tutorial - Electronic Sink.

Thank you for your help @jousefm,
but I think your changes with the boundary conditions don’t resemble what we are trying to simulate.

My copy of your project:
https://www.simscale.com/projects/embers/cooling_of_an_electronic_sink_using_conjugate_heat_transfer_analysis_-tutorial_try_2-/

But lets start with the material properties: I just took the materials from the library, the values differ only slightly from the ones you used, so it has hardly any impact. Especially not causing a temperature of over 4000K. (I assume changing the density from copper to 2700 kg/m^3, which is the density of aluminium, was a mistake. But it should only cause the chips to heat up faster and have no effect in a steady state anlysis, right?)

The boundary conditions:
The idea behind this simulation is, that two chips have a certain power loss (because of elcectrical resistances), which has to be transported away by the circulating air. The “Absolute power source” in the chips is supposed to be the only energy source in the simulation and the air the only means for the energy to leave the system (if we ignore the optional boundary condition “External wall heat flux” for the exterior faces ). The initial conditions, which set the starting temperatures of the chips and the heat sink to 363K or 316K, should only cause faster convergence and are not necessary. 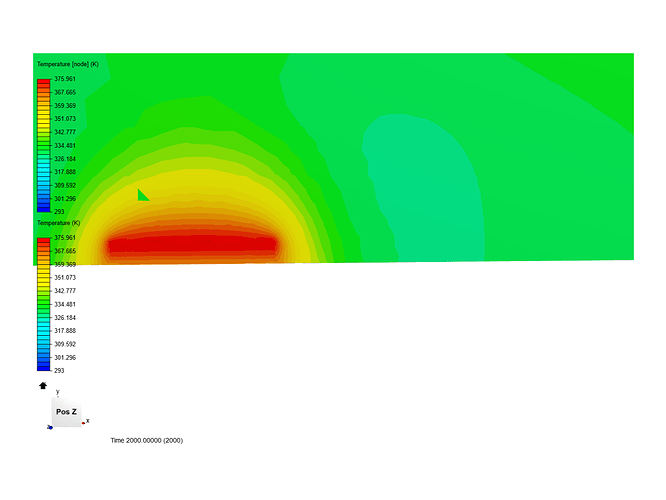 Temperature%20gradient%20small%20chip1440×1080 44 KB
This picture was taken in my run 5, in which I increased the absolute power source from 5 to 500W. This increase by the factor 100 raises the maximum temperature only by 13 Kelvin, because most of the energy leaves the system through the face with the fixed temperature.

Therefor I think it is not permissible to use fixed temperature boundary conditions. There has to be a differnt solution to my problem.

Edit: I have just check the public projects and couldn’t find a simulation of this tutorial which was performed after the 7th of august ( the last time the tutorial was updated, maybe there or the update before was the use of the absoulute power source insted of the fixed temperature face introduced) and didn’t have the same unreasonable results as mine (most are at 2670K, I assume because they included the convection through the exterior faces). So maybe the use of 5 W with an absolute power source is just to much and it would really cause very high temperatures. If you compare it to the large chip it got only 5W of power instead of 10W, but its 130 mm^2 of surface area are just a fraction of the 2586 mm^2 of the heat sink. Was the simulation tested again, after the absolute power sources got introduced?

Thank you for the very detailed description and your thoughts on this case - will countercheck with my colleagues and get back to you as soon as possible!

500 Watt is a lot of heating power for such a tiny chip. As far as I am aware, the extruder of my 3D printer has a 40 Watt heater. The extruder has a heat sink and a small fan and is being fed cold plastic which absorbs heat and still it can get up to 250 degrees Celsius or more. Your small chip has negligible cooling in your scenario so I’m not that surprised that it would heat to 4,000 Kelvin.

I didn’t quite understand what you were saying about the temperature only increasing 13 C when increasing power from 5 W to 500 W. It should increase a lot but not proportionally as at higher temperatures the convection current is faster.

Thank your you for the numbers from your printer, @roy_g . I have very little experience with electronics, especially not with heat distribution, but your data seems to confirm my point, that it is unreasonable to use fixed temperature faces in such a simulation (because my result with 4000K seems more realistic than the 360 with the fixed temperature face).

The increase from 5 to 500 W was just an extreme example for making visible, that most of the energy leaves the system through the fixed temperature face. If the first 5 W were enough to heat the chip from 293 to 360 K (deltaT=76 K), then increase of the power by the factor 100 should cause an way higher temperature, but it only increased it by additionally 13 K. This seems totally unrealistic and shows, that the use of fixed temperature faces is unreasonable. These can only be used if you already know the temperature in the chip in the steady state of the system, but that is one of the information we are trying to determine. This temperature varies with the effectiveness of the cooling setup and can’t be known before the simulation.

@embers I agree. You need to know how much electrical power the chip ‘consumes’ i.e. Power in minus power out and this is the number of Watts. The temperature is a function of the number of Watts and the rate at which heat is removed.

Amazing Guide. Will have a look at that later on and let you know after implementing it .