Changing the center of rotation and zooming in the 3D viewer

Lately I’ve seen several SimScale users interacting differently with the 3D viewer - especially in terms of rotating and zooming. Therefore I wanted to share my typical way of using it here:

I know that there are lot of different 3D viewers out there that have different default mouse interaction mechanisms. Keeping in mind that we want to make the viewer work also on touch devices moving forward, are there specific things you would like to see improved in terms of the viewer interaction?

Looking forward to your opinions!

Is there a possibility of introducing view mode change? From perspective to orthogonal / parallel (or how is it called). This one not only hurts my eyes, but is also annoying in everyday use.

When I want to just move a model, model rotates. In big close-up, even a small mouse movement often causes model to disappear from the screen.

Further, setting bounding box dimensions I don’t actually see its borders properly, because of a perspective.

I’ve changed it in Paraview and it works very well. BTW: does anyone know how to change it in the newest version? (I have Paraview 4.3.1). Thanks in advance.

absolutely! I do very much agree - with a parallel projection, it will be significantly easier to interact with the viewer. Aligning the bounding box of the hex-dominant mesh operation with a certain flow domain is a great example where the current “perspective” view mode is not ideal. I added you to the feature request for a switch of this perspective.

You’re saying that in a big close-up small mouse movement often let the model disappear - is that because of a center of rotation that is not well placed for this current zoom level? What would you like to see improved for these situations? If you double click somewhere near the location you have zoomed in, is the behavior then better?

Regarding ParaView 4.3.1: As far as I know, the “View settings” moved to the “Settings panel” with one of the latest releases (see this blog post: http://www.kitware.com/blog/home/post/621 ). I am using PV on a linux machine and the option “Camera Parallel Projection” is in the settings panel under “View (Render View)” - see screenshot below (it’s almost at the bottom of the panel). 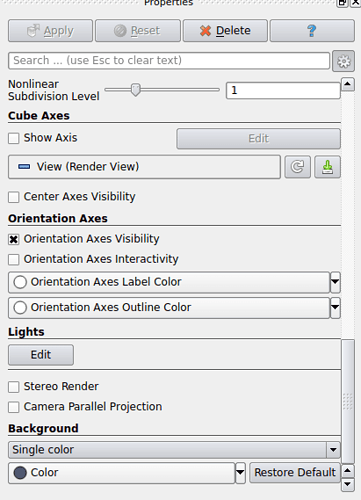 Thanks a lot for your suggestions!

O thanks! I couldn’t find this option in the newest version. In the old one it was available in the global view settings.

Glad I could help, @Maciek!

I’m thinking about situations such as F1 car simulation where your model is placed in long domain. To see surface mesh at the car I do ‘zoom in’ so in fact I go into the domain through the outside wall and then I can inspect the surface mesh. However, a combination of perspective view and big close-up is very irritating in this matter. Why? Well, I thought I described it properly in my report. Do you remember my example with an inflatable beach ball?

In Paraview, Solid Edge or Blender it is enough to switch from perspective to parallel view (or theirs equivalent names) and model navigation automatically becomes instinctive. I’m not a programmer, but I think it’s just a matter of implementing this feature to SS and issue solved. Users will be able to switch to preferred one.

BTW: I really like the idea of displaying surface mesh only as a default setting - it’s much faster. What I’d like to see here though is a possibility of hiding selected surfaces together with mesh assigned to these surfaces. So that I could turn off inlet, outlet, outside walls and keep investigated object only.

BTW: I really like the idea of displaying surface mesh only as a default setting - it’s much faster. What I’d like to see here though is a possibility of hiding selected surfaces together with mesh assigned to these surfaces. So that I could turn off inlet, outlet, outside walls and keep investigated object only.

I like this idea! Some times when I create topological Entity Sets, turning off some walls and inlets and so on will be useful.

got it - thanks a lot for elaborating. Yes, the parallel projection is a priority for the new viewer features. I’ll give you a heads-up once it’s ready for testing.

). Will be shipped with one of the next releases! Hope you will like it!

+1 for parallel view. In post processor mode zooming doesn´t work same way as in mesh creator and simulation designer. Double clicking doesn´t change focal point when zooming and makes it more difficult to zoom in to a certain area. It would be useful to work the same way as in the other to modes.