in this weeks spotlight we will have a look at a CFD simulation of the Alfa Romeo P2 1930 by our PowerUser @pfernandez.

The P2 was modified for season 1930 and won the Targa Florio that year, in the hands of Achille Varzi, who broke the average speed record for the race.^1

In this simulations, different configurations were considered: 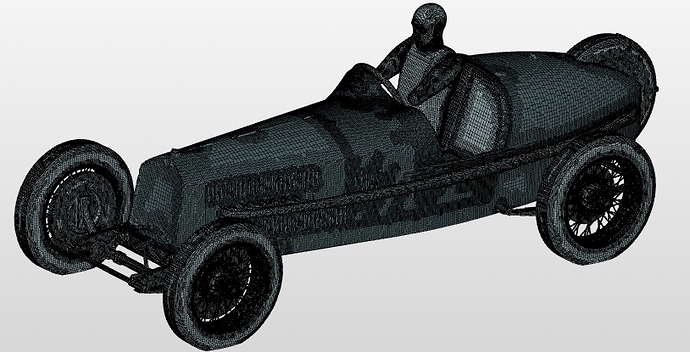 The number of cells in the _BaseMeshBox can be chosen after setting the dimensions of the box. The size of the box can be based on different assumptions. In this case the virtual wind tunnel was defined to be about 10 times the length of the car and 5 times the width and height of the model with the car position towards the inlet and the floor intersecting the tires in order to simulate a contact patch.

This Google Sheet created by @pfernandez helped to get an estimation of the cell size and number of cells per refinement level.

Specify the material point to be within the fluid domain.

There are different kinds of refinements we can apply to our model in snappyHexMesh. Take a look at this tour by Engys for a comprehensive description of many of its features. 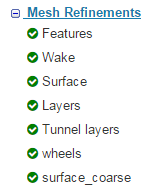 The feature refinement identifies sharp edges on the geometry. In SimScale define the level to 0 because we just want to identify them so the meshing algorithm can take them into account. The cell size around the edges will be that of the surfaces close to it.

In order to capture the wake, we define a region with finer mesh around and behind the vehicle. For that we create a geometry primitive to define the volume we want to refine. 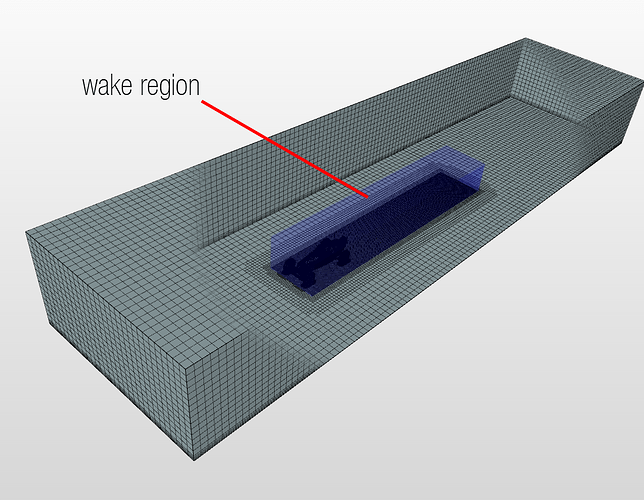 The refinement level was taken based on the spreadsheet calculations shared above.

The surface refinement for this geometry was split into three areas:

In this simulation we left the default settings for layer addition on the faces of the vehicle and the tunnel floor.

The result is a mesh of ~11 million cells.

Six different types of boundary conditions were used for this simulation: 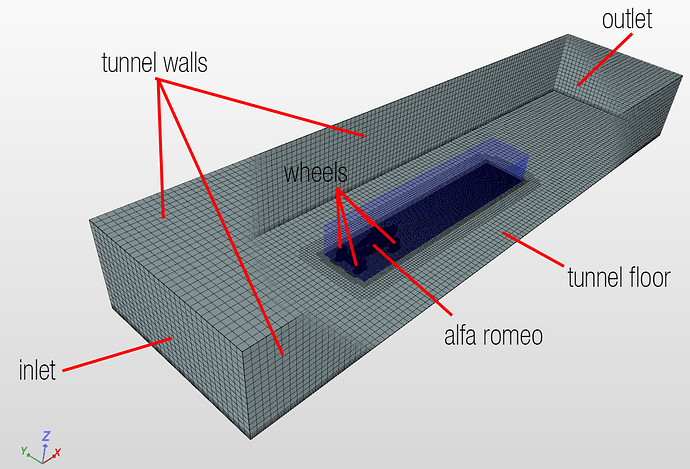 The residuals control were modified and the absolute tolerance was set to:

The end time was set to 3000 iterations which should be enough to reach an asymptotic value in terms of drag.

The following is an accumulated drag plot. The functionality was introduced in OpenFOAM 2.2.0 (see this controlDict as an example), and can tell us which areas of the car build up drag. 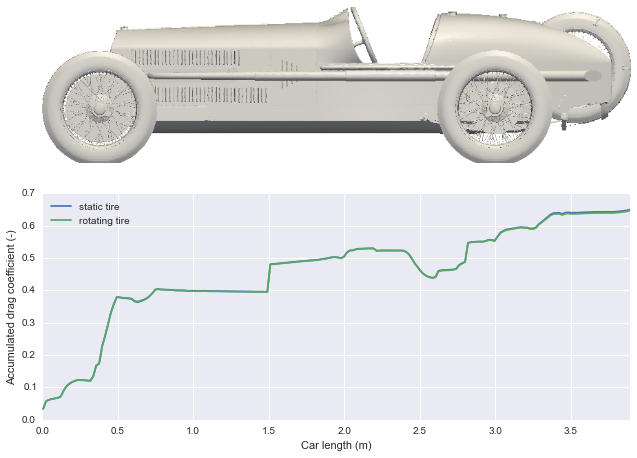 It is readily apparent that the blunt front bodywork of this racecar is responsible for nearly half the drag while the streamlined rear-end of the car adds very little.

This early models have no aerodynamic devices so she should not generate any significant amount of downforce as the very low coefficient shows in the following plot. 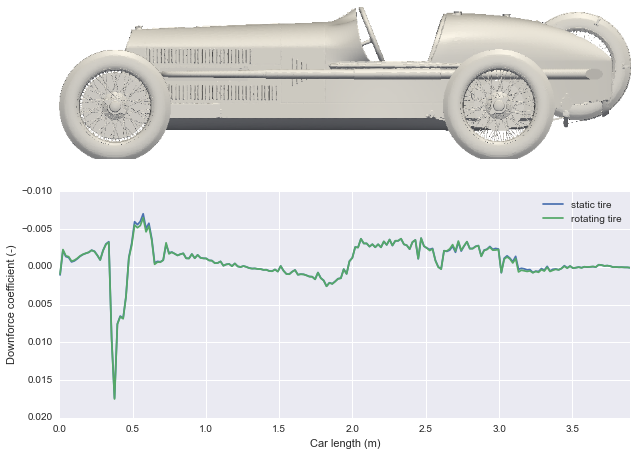 The inclined front along with the pressure build-up generate some downforce at the front wheel. The rest of the car is rather neutral but for the cabin which contributes some sustained lift.

There seems to be little difference between a static wheel simulation and imposing a rotating wall boundary condition on the tires; but though little, there is. 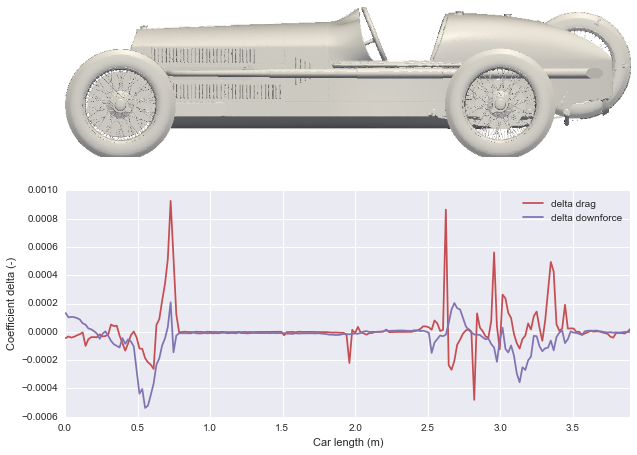 The results show static minus rotating.

Now, what if we include the driver?

As the Alfa Romeo P2 is an open two-seater, the influence of the driver cannot be neglected. These are the results.

As we can see from the definition of drag, when we look at the Cd alone, we are not taking the reference area into account; and with a driver, the latter increases. So, we add the concept of drag area Cd * A which will allow us to compare results from different sources in a more equitable manner. 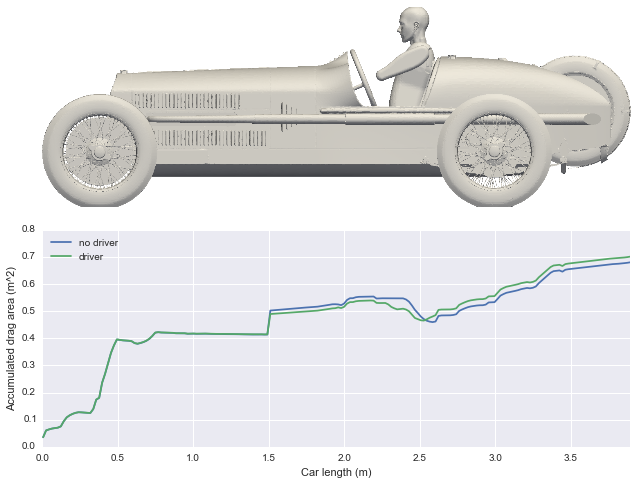 The plot shows that the effect of the driver is appreciable from the start of the cabin interior at 1.5 m as with the driver more pressure builds-up at the firewall. 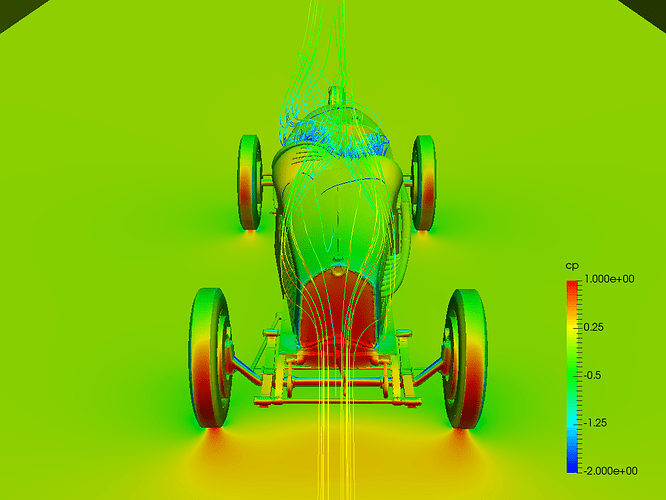 To copy this project into your workspace, simply follow the instruction given in the picture below.