My goal is to develop components and modifications for my race car by getting a basic idea of their effect in CFD first.
I decided to start simple by using a 2D model of the centerline of the car. However, after discovering I cannot setup 2D CFD with Simscale, I chose to just extrude the 2D profile a small distance. (I did see a post about creating a 2D mesh outside of Simscale, but that’s over my head for now)

From various sources, I expect the Cd of the full car (stock configuration) to be about 0.36 and the Cl to be about 0.27. (141lb drag and 106lb lift at 100mph). The main source I have used to compare coefficients and pressure plots is: https://hanchagroup.wordpress.com/tag/miata/

My first attempt: https://www.simscale.com/projects/wbenson/2d-stock-norad/
Setup: 2D geometry extruded 1foot wide, no radiator (so no restriction of flow to underhood area), standard mesh set to “5 fineness” with refinement regions, no initial conditions, 1000 iterations. incompressible k-omega SST model.
Result: Cd=0.32, Cl=1.87
Considering I am only looking at the centerline of the car and no 3D effects, I was very happy with the drag. however, the lift is almost 7 times more than expected.
The order of magnitude of my pressure results seem roughly correct, and the locations of high and low pressures seemed to make sense. Comparing my results to pressure images in the link above I noticed they have a strong low pressure region at the front of the car and I have high pressure under my engine bay.

My second attempt: https://www.simscale.com/projects/wbenson/2d-stock-rad-jaggedbottom/
I decided to add jagged edges to the bottom/floor to make sure the smooth floor wasn’t contributing to the inaccurate lift result. I also made the model thinner (only 1inch wide), increased mesh setting to 6, and increased the iterations to 2000. i accidentally forgot to change to reference area for the thinner model, so the coefficients shown in the post-processor are 12 times too small.
i added a ‘porous media’ to add the effect of the pressure drop into the engine bay across the radiator.
Result: Cd=0.27, Cl=2.02
The lift is still too many times higher than drag. 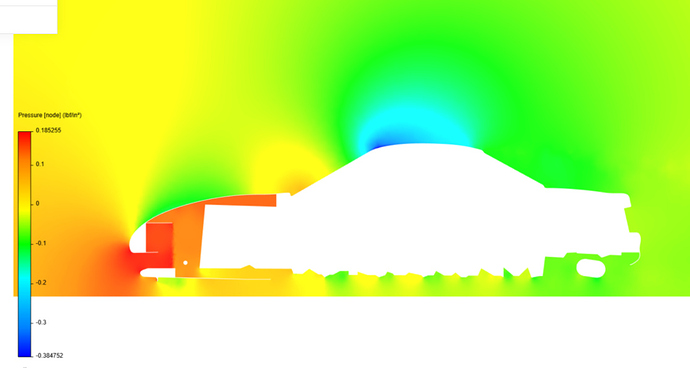 My third attempt: https://www.simscale.com/projects/wbenson/2d-nounderhood-noairdam/
I removed the radiator/underhood area completely to try to make my model more similar to the one referenced above, and try to get rid of the high pressure under the engine bay. I also removed the small front ‘airdam/lip’ because I thought that could be creating lift from the high pressure in front of it. I made the refinement regions more fine, added an initial condition of velocity equal to free stream velocity.
Results: the coefficients were unstable, but lift is still many times higher than drag.
I assume the instability is due to my initial condition? Should I not have done that?

Am I making an inaccurate assumption, am I not setting something up correctly, or is something weird going on with my simulation?
I don’t expect exactly exactly correct forces from my “2D” model, but the fact that lift is so much higher relative to drag tells me that something is fundamentally wrong with a pressure zone, etc.
I don’t want to start making changes or adding components until I have a reasonable baseline result where drag and lift are roughly equal.

It looks interesting, but for the moment is quite invalid. Your lift force is ‘stormy’ and simulation convergence is missing: 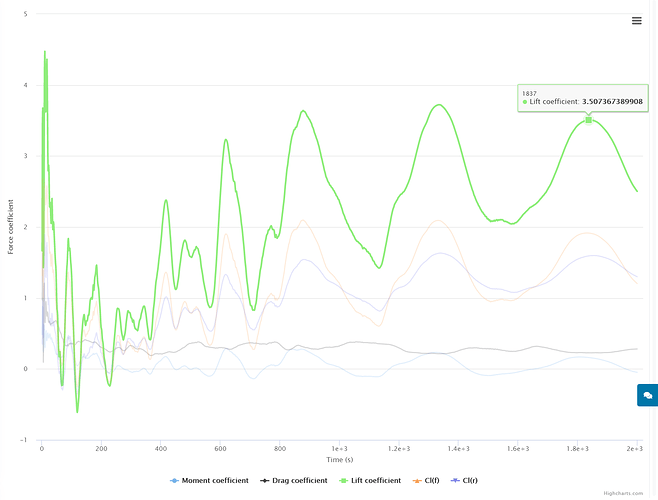 Quite possibly your geometry sheds vortices and, I would say, it may be not possible to eliminate it, as vortices are natural in complex shapes flow simulation. In ‘Simulation control’ you can set few steps (Write interval) and you will notice that very unsteady flow…

Last year I played with similar quasi 2D simulation with Tesla Truck. It could inspire you: my domain is much smaller, meshing and simulations are short. Only three BL are used, but meshing in car vicinity was very important.

Here it is Musing about Tesla Truck

You will also notice fluctuation of drag and lift, however lift is negative. 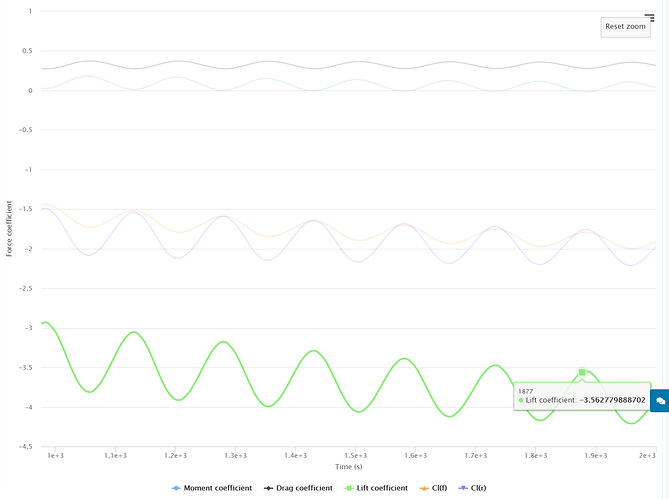 So far, so good: simulating car slice is different business and may be considered as wing profile simulation, hence you can find also one of my coefficients set relates to wing…