I just started the exercise however I notice the differences between the subject and my interface.

For the “Layer adding controls” part in the mesh, I have sui parameters do not appear. Moreover, I can not set 190 for the value of “Max face angle for layer generation”, the platform tells me that the value must be less than 180.

Here is the link of my project:

Thanks in advance
Julien

Hi @julien_venture and sorry for the delayed response!

Did you manage to create your mesh in the meantime? You are right. The pictures have to be adapted for this tutorial. I will do that asap

Thank you very much for mentioning!

Hello,
I succeeded in realizing a mesh by modifying only the parameters that I could and I obtained the following results:

Because I’m doing the SimScale CFD Master Class training, I have to answer a question about the mesh, I would like to know if the answers are still up-to-date with the new configuration.

sorry for the delayed reponse. I will contact you privately for this issue. Please check your inbox.

Hi @Milad_Mafi. Can you please post here the names of books that you said in webinar I will recommend some books to learn CFD?

I have merged some good resources in this section - have a look at “Textbooks”. Tell me if that helped you!

Thank you so much @jousefm for a quick reply.

I’m sure they’ll help me a lot

What a great timeless video!!! I hope I can still ask questions

I know everyone ‘sees’ the boundary layer differently in their mind, I just want to make sure what I ‘see’ at a little more detailed level is still based somewhat on reality.

You mention the ‘parabolic’ shape of velocity increase in the BL at around 8:30 into your video.

I have always considered the y velocity profile to be more ‘asymptotic’ at both the lower 0 end and the upper freestream end. I think that regardless of how close the velocity gets to 0 or freestream, they never really get there after the freesteam passes over the flat plat. I have always considered that there would never be an air particle on the surface of the plate that would never move after a freestream was introduced over it (it may take a long time to resolve its movement, but I think it will eventually move). Any comments on what my brain ‘sees’?

Also, with regards to X distance. With the assumptions used for CFD calculations of viscous drag, is there an X distance on a flat plate where the boundary layer will separate?

The “shape” of the velocity profile really depends on which state you are talking about. Turbulent flows usually have a velocity profile that have a higher gradient at the wall due to increased momentum transport.

On the left side you see a laminar velocity profile and on the right side a turbulent velocity profile for Poiseuille flow. Another assumption that is made when drawing these profiles is that we actually look at the “mean” because in fact there is a fluctuating velocity field instantaneously which looks a bit chaotic as depicted below.

This becomes important when talking about Reynolds Averaging but that’s another topic.

With the assumptions used for CFD calculations of viscous drag, is there an X distance on a flat plate where the boundary layer will separate?

P.S.: Actually good material to talk about - maybe I will do a video about such stuff in the future (if even necessary)

The “shape” of the velocity profile really …

But there is an X pressure gradient towards 0 shown, so I was just wondering.

Also can you tell me exactly what you mean with asymptotic to zero at which position?

we have to be careful that we are speaking of the same thing.

Here is the chart from video: 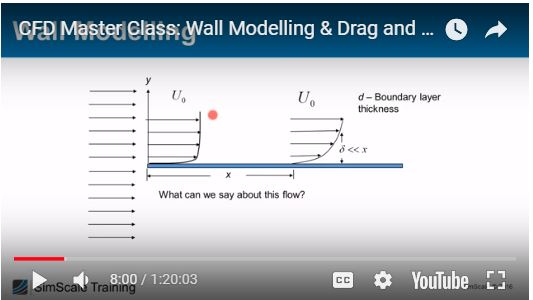 All his boundary layer U magnitude as less at position x=X than at position x=0. I am just asking at some time WAY into the future what does the current assumptions of CFD show there?

Sorry, just started beer time and had to answer quick

maybe to sum things up: In the future you will see the boundary layer reach a maximum thickness called \delta which is different for turbulent and laminar flow over a flat plate, namely Blasius solution. The velocity profile would not change in the case of laminar or turbulent but it would when we look at transitional behavior which is again another level because this will include phenomena like the lift-up effect etc.

Also quite late here, going to bed soon - hope I did not mix up “easy” explanations

Sorry I don’t think I am asking the question so that it is decipherable. I can live without an answer but I think I will continue to ‘see’ the BL as having asymptotic magnitude values approaching y=0 and y=BL thickness (ie I think asymptotic values would minimize magnitude discontinuities at the boundaries of the BL).

maybe it’s a misunderstanding from my side

in this CFD master class workshop i am done with first meshing but second meshing which content “WITH LAYER”
are face some problem in meshing.

due to limitation i cant go with higher memory run.
please help me.
thank you,
Rohit

please always share the project links in your posts as well, makes it way easier for us to immediately have a look at the project(s). You can decrease the level of the refinements by one and test that - I assume that you used the options given in the exercise?

as previously mentioned reduce the refinement levels, that will do the job. What you can do is to start coarse, output a force or any other quantity and use that as some kind of convergence criterium, as long as no oscillating residuals can be observed that approach is the state of the art procedure in CFD to see when a mesh is sufficiently fine - FEA does the same but is not dependent on the residuals.

Let me know how things go!

I will try this.