Many conjugate heat transfer simulations include geometries that have very thin, detailed air gaps. These types of small channels can dramatically increase cell count in the domain, and can cause divergence issues due to poor mesh quality in the fluid domain. At times, time and effort can be saved by approximating the thin fluid gaps by a solid region with material properties of air. By doing this, convection is ignored and the only mode of heat transfer considered is conduction. Generally this is valid in thin sections, but as a region/gap gets larger, the convection effects become more dominant and this approach is no longer valid.

I decided to generate test case to evaluate the Rayleigh # and validity of the ~1700 threshold. I ended up creating this natural convection electronics cooling project.

The geometry originated from a Raspberry Pi GrabCAD project.

I parameterized the distance between the PCB and top of the electronics enclosure and considered heights of 6, 10, 14, and 18 mm. 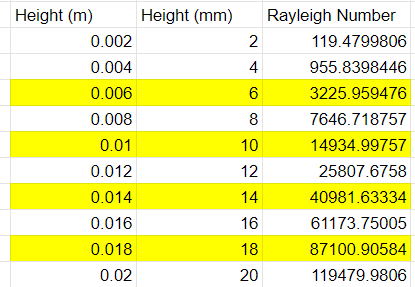 In the table above I show the calculated Rayleigh numbers. Rows in yellow highlight the distances I ran simulations at. Although the critical value of 1700 represent a gap height of 4.85 mm, I decided to try larger gaps as gaps less than that did not make a lot of sense in terms of enclosure design/packaging. For each distance listed I ran 2 simulations: 1 simulation only considered “solid air”/conduction in the enclosure and 1 simulation explicitly modeling the air as an ideal gas. Next, I plotted the difference in max chip temperature at each of the gaps: 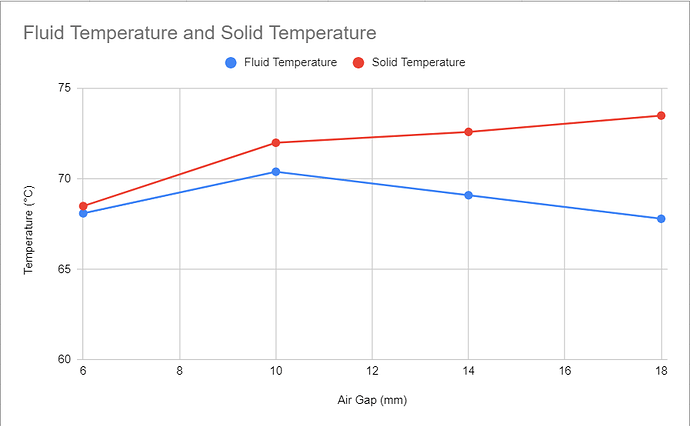