I have a quick question. Is it possible to simulate a laminar axis-switching liquid jet (launched through a small, elliptical orifice)?

Hey there, and thanks for using the forum!

I would need a little bit more details to guide you. Can you please include pictures of the device geometry? Under what operating conditions would it work?

Excuse my late response, I was on vacation. Thank you for your quick answer! So far there is not really a specific device/nozzle. The setup is rather simple: just a small elliptic orifice with semi-axes of 8.5 mm and 4.2 mm where we have a steady water flow going out of the nozzle.

Besides the dimensions, it would look something like this:

The elliptic orifice results in an oscillatory behaviour of the jet. A 3D simulation of the phenomenon would look like this (except the orifice would be elliptic): 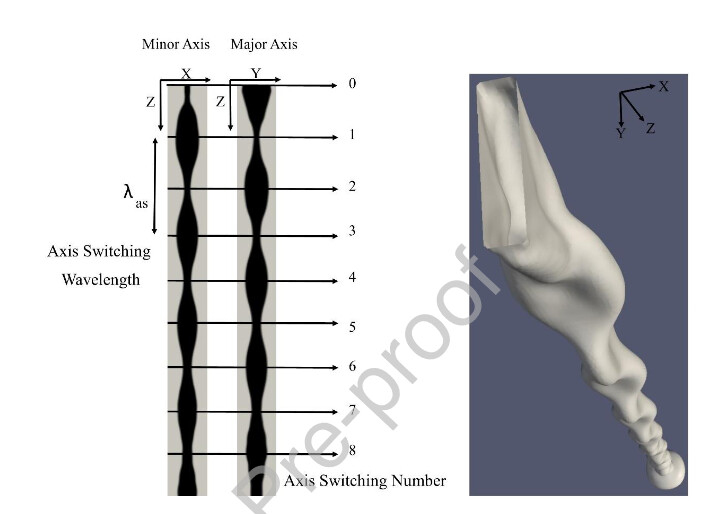 The outflow would be rather small, so that the jet remains laminar, so-called Rayleight regime (mean exit velocity: 0.045 l/s - 0.14l/s). The goal of the project is to do analysis on the free-surface of the jet and the wavelength and amplitude of the oscillations.

It might be a rather simple application of multiphase flow as far as I am concerned, but I didn’t manage to do it.

Hi Jan, and thanks for the detailed description.

I think that you should be able to run this simulation with our Multiphase solver.

Could you please reply here with the URL of your project? I would like to have a look at your simulation setup and geometry model.