I am having some trouble importing a .msh mesh. The fluent mesh consists of two parts, one is rotating similar to a MRF approach. The regions are connected through a so called mapped interface.

I converted the mesh (fluentMeshToFoam) and coupled the two seperate meshes (stitchMesh). If I upload the mesh now, it is recognized as one single volume and all patches are present. So far, so good. But to be able to set up a rotating zone, I need to split the volume up. I set up two zones (setSet) and uploaded the mesh. The two zones I set appear, but somehow there is also the default region. And all the patches appear only in that volume (region0).

mixedRegionsCrop938×452 147 KB
If I now split the mesh up (splitMeshRegions), the two regions with the corresponding patches show up after uploading at SimScale. In addition openFOAM creates an interface patch between the two regions, which is assigned mappedWall by default. 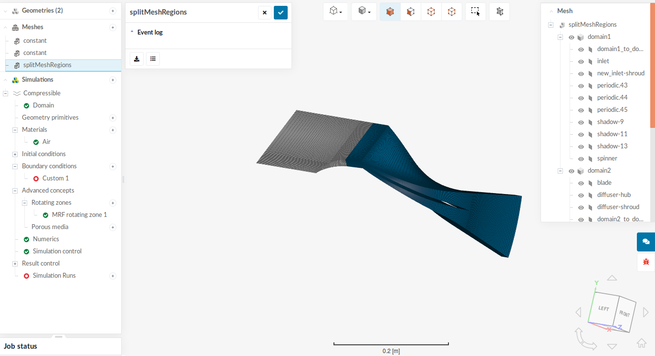