I thought about testing a case on your platform. It is about a “2D Zero Pressure Gradient Flat Plate Validation Case”.

I was wondering if there is a farfield BC in SimScale? If not I probably just have to choose a distance that is far enough away from my boundary layer so that it is not influencing my boundary layer, right?

Furthermore I thought about creating a flat plate CAD model and then import it into SimScale. Or is it possible/better to create 2 boxes in SimScale directly and apply boundary conditions on them? (OnFlow area before the flow arrives at the plate, starting point of the plate)

If my explanation is not clear, I will upload a sketch. Hope you understand a bit what I want to validate 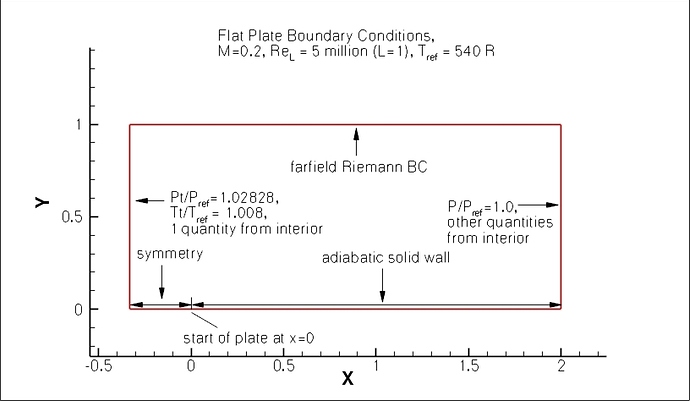 It’s a good case you have selected to simulate. Regarding the question of “far field BC” ;

'I was wondering if there is a farfield BC in SimScale? If not I probably just have to choose a distance that is far enough away from my boundary layer so that it is not influencing my boundary layer, right? ’

I would first like to clarify what I interpret as such a BC. As this BC name is commonly used by “fluent” or other tools, they describe it as given by the link:

So, by definition a “Far-field” BC is suppose to be ‘far’. The analogous BC in SimScale/OpenFOAM is the Velocity “Freestream BC” . Freestream BC is like a hybrid fixedValue and zeroGradient boundary condition. Similar to the ‘Far-field’ it is generally required to be placed far at free-stream conditions.

Then, I suppose what you require is something like a “Non-Reflective/Wave transmissive” or an “Advective” BC that does not influence the interior domain and can be placed closer.

Thank you very much @Ali_Arafat for your detailed reply.

I understood everything so far.

What do you mean by:

Then, I suppose what you require is something like a “Non-Reflective/Wave transmissive” or an “Advective” BC that does not influence the interior domain and can be placed closer.

I just thought about a trouble that may occur before the flow arrives at my plate (in the picture above the so called “adiabatic solid wall”). I want to avoid turbulences in front of the plate. Is it useful to model the plate just as a box? Meaning that is has zero thickness in y-direction. Or better create a plate with a slope?
What would you suggest?

In contrast to the so called ‘Far-field’ and 'free-stream ’ BCs , the ‘Advective/Non-reflective’ BC can be placed at a short distance and not effect / influence the boundary layer.

But, for such a case I don’t really think you need to use them and can make the top boundary at a intermediate distance away from the bottom flat plate boundary.

Regarding the thickness of the flat plate, yes it can have ‘zero thickness’. Also if you are doing a 2D case, as mentioned in the first post, you will have to create the mesh locally e.g via ‘blockMesh’ tool (not on the platform as it currently supports 3D mesh generation only).

Below, are some references to get you started with the mesh and to get some general idea.

I hope it helps.

I have also tested this case with SpalartAllmaras. My boundary conditions for inlet, outlet, and the farfield BC are:

dear @jousefm (maybe its too late to reply now but I’ll reply anyways!),
adding onto the comment made by @Ali_Arafat, although a non-reflective/wave-transmissive BC could be placed closer to the geometry without affecting the boundary layer (and the boundary layer is the most essential part of a flat plate simulation!), it must not be placed so close as to affect the simulation results. Although the flat plate would not affect the flow in the same way as an airfoil, for example (domain boundaries for airfoil simulations can be at least 20 chord lengths away from the airfoil in each direction), ideally the results should not be dependent on domain size!