** Abstract:**
The halo is a driver crash protection system used in open-wheel racing series which consists of a curved bar placed to protect the driver’s head. The system was introduced in 2015 and became mandatory according to FIA homologation and regulation from 2018. The first tests with the prototypes equipped with the system were carried out in 2016 and in July 2017. Since the 2018 season, the FIA has made the halo mandatory on every vehicle in Formula 1, Formula 2 and Formula 3 as a new safety measure. In this project, F1 halo is simulated in two different static load condition and trying to find stress and total displacement on the surface.

Construction:-
The system consists of a bracket that surrounds the driver’s head and is connected at three points to the vehicle frame. The component is made of titanium and weighed around 7 kilograms in the version presented in 2016. The weight rose to 9 kilograms in 2017. The system is not developed by the teams, but is manufactured by three approved external manufacturers chosen by the FIA and is the same specification for all vehicles. In a simulation performed by the FIA, using the data of 40 real incidents, the use of the system led to a 17% theoretical increase in the survival rate of the driver. 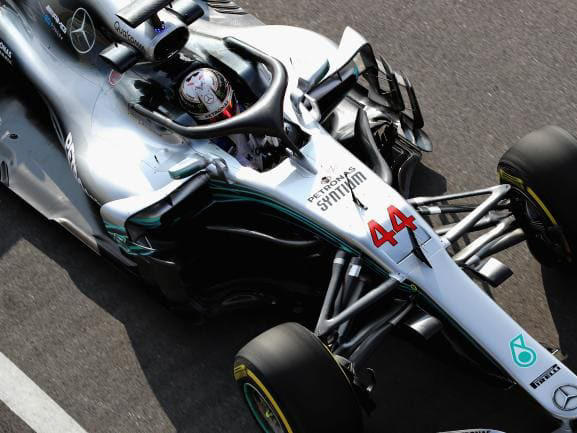 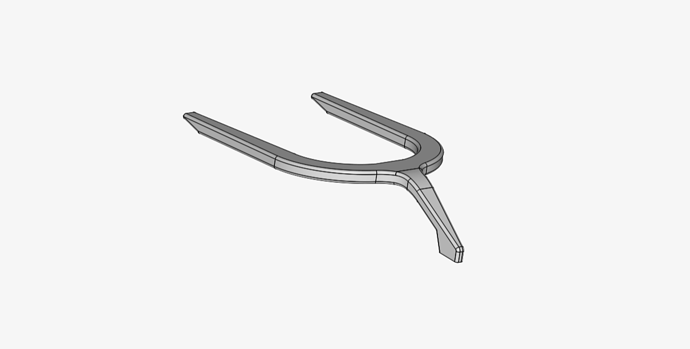 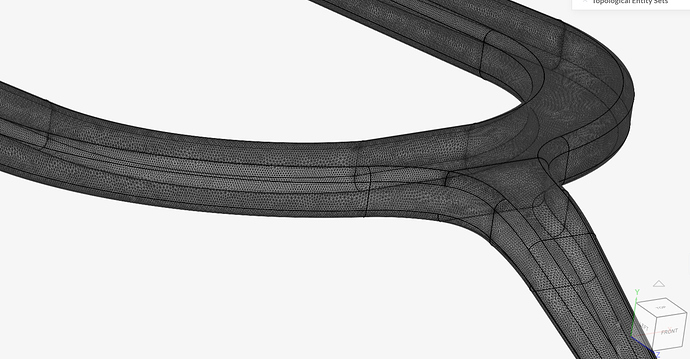 Material :
It all starts with titanium. Lots of titanium.

“We had to buy about 10 tonnes of high-strength titanium within one-and-a-half months, and receive it all in time and in perfect quality,” says Steffen Zacharias of Germany’s CP Autosport, one of the three manufacturers chosen by the FIA as official suppliers of the new Halo safety device. 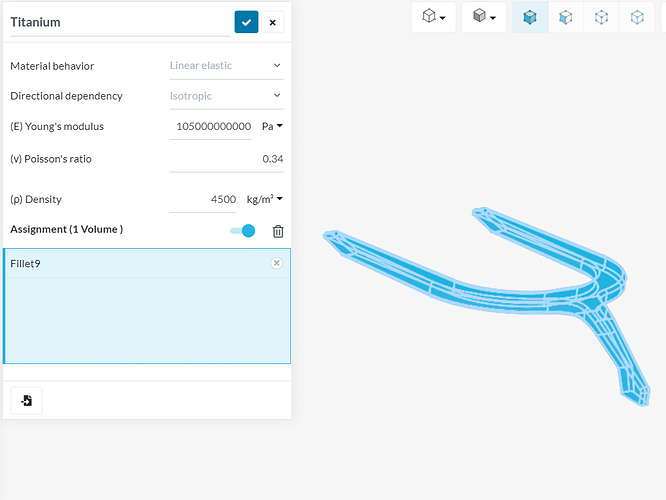 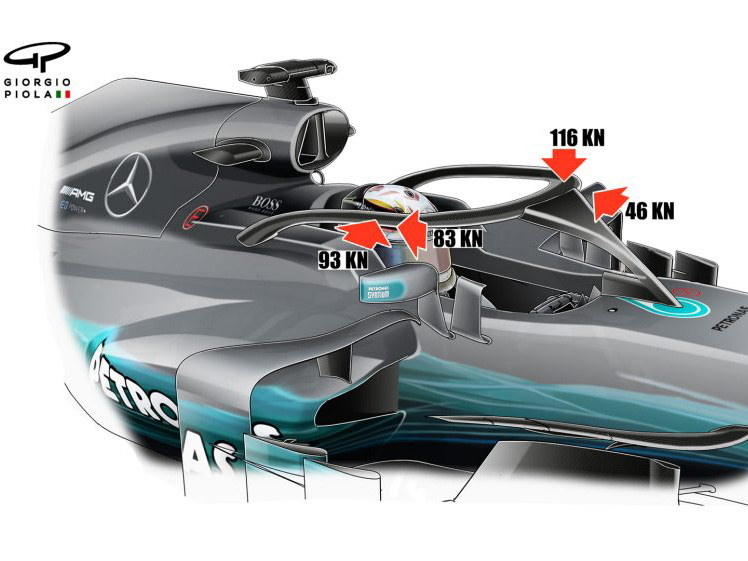 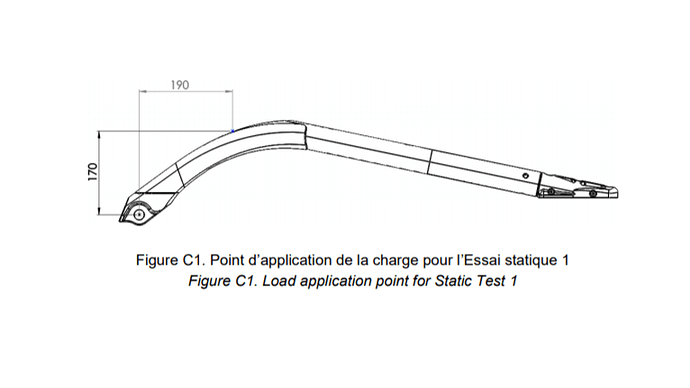 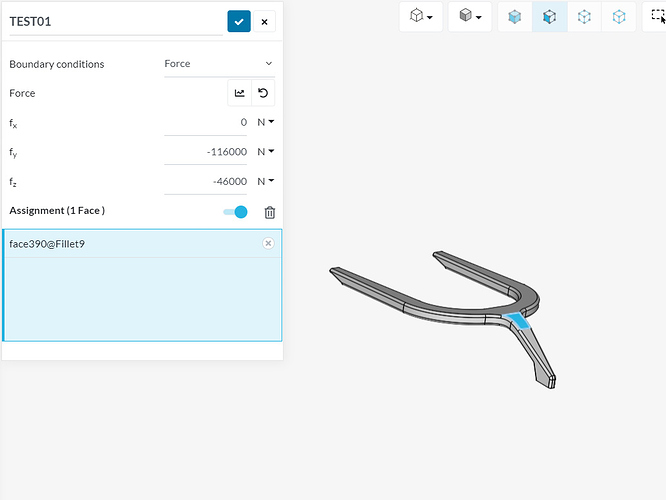 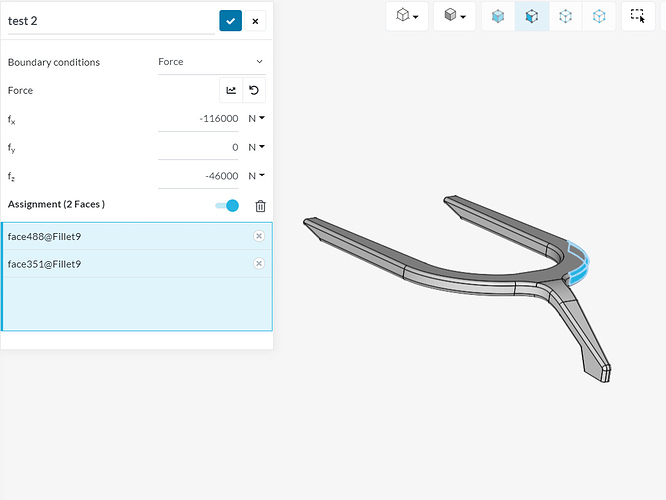 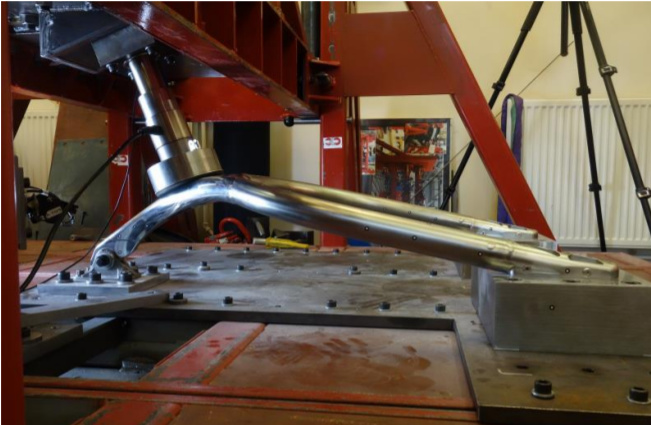 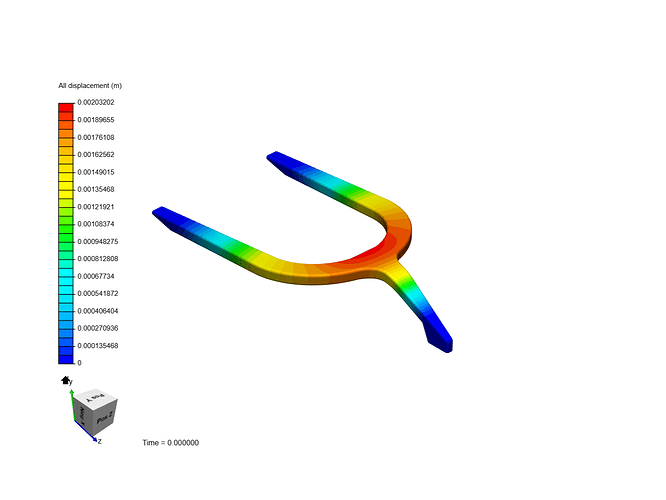 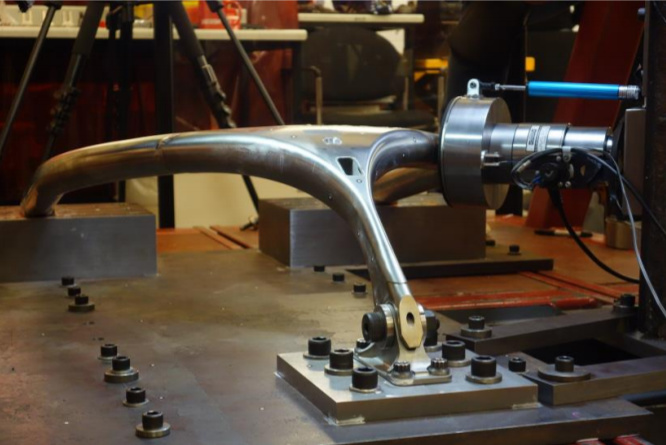 fig: Halo on a Test bench. 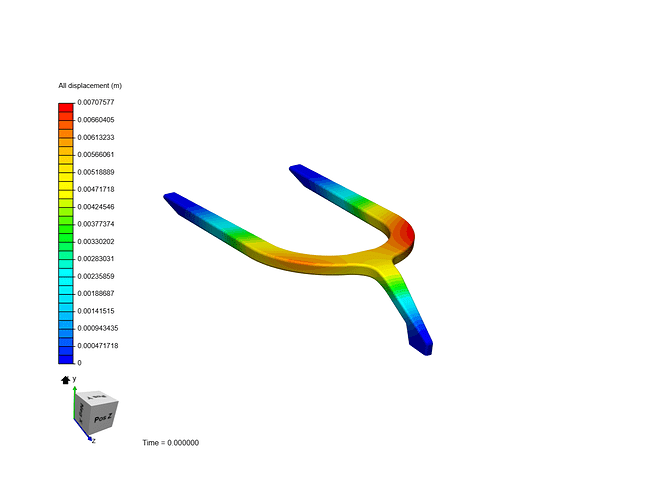 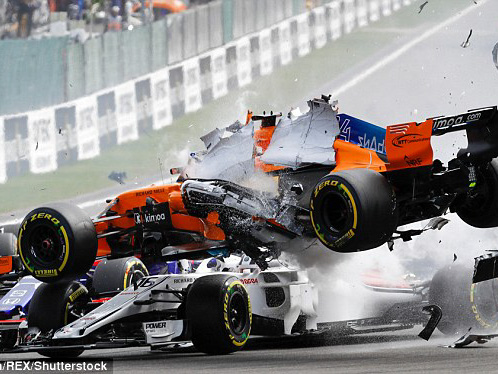 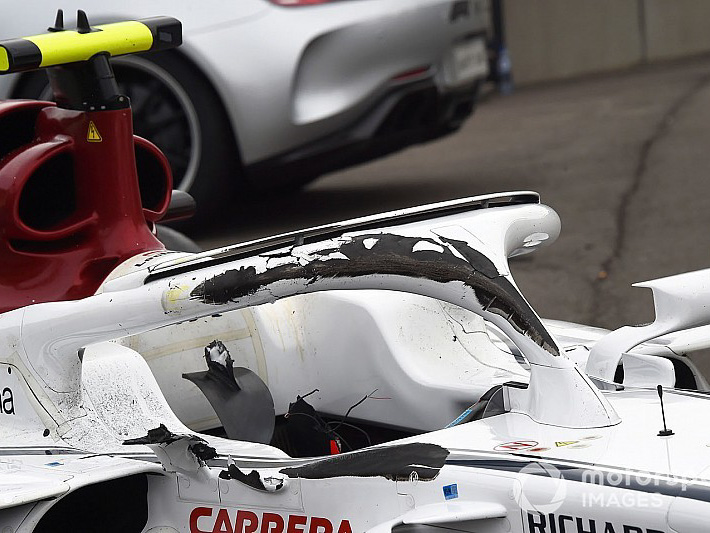 but there was problem, when I click on form same page open again. @jousefm help me.
thank you,
rohit.

I see you have used a fixed support for the front joint to the frame but the testing image shows more like a pinned joint. Why the inconsistency?

hi @DaleKramer sir,
I was used fixed support because only I was found the only one bc related to the application(testing image). 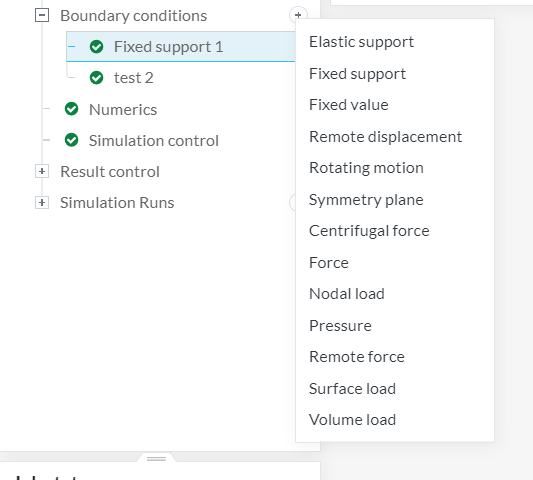 you can also suggest me another thing to do pinned joint.
thank you for this suggestion

Sorry, I have not much FEA knowledge, but I am sure there is a way.

my colleague Sebastian fixed the form, it should work now

For the “pinned support” you can use a “remote displacement” . Just set the remote point into the center of the pin and free the rotation around the axis direction.

One additional hint: instead of using a “very fine” 1st order mesh, you could increase the result accuracy by getting a bit coarser on the fineness and use a 2nd order mesh instead.

@rszoeke bet me to it, but for what it’s worth I have copied your project and modified it to demonstrate how to model a pin joint. You can see my modified project here:

Please take a look at the following simulations:

As a guide the front pin translates by about 12 mm under 116 kN of longitudinal load when it is unconstrained.

If the cockpit is much stiffer than the halo then the front pin will act as though its translation is fixed.

Agreed, but I suspect that the cockpit on the vehicle would be significantly more flexible than the test rig.

all point are rigidly attached to the cockpit. 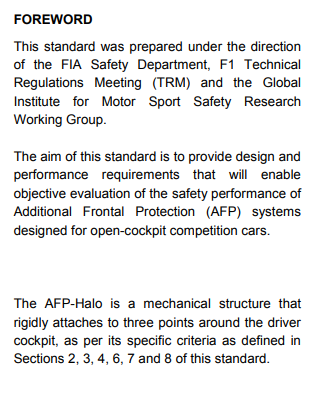 so, I don’t think there is any pinned joint in the cockpit BECAUSE the total displacement should be less than the 3 mm in case 1 and less than 45 mm in case 2.
(correct me if it’s wrong) @DaleKramer @rszoeke @jousefm

I think there is very much room left for interpretation of that document.

If I were trying to have my halo approved by the committee, I would want to know specifically, the rigidity of the test structure that the test halo would be mounted to in order to measure the required deflection of the halo under load.

The document does not specify that.

I do believe that they intend the rear joint to be rigidly fixed in all degrees of freedom to the vehicle.

However, I think that the front joint described in 3.5 is a pinned joint on the test fixture (if that is the actual test fixture that they have shown us in the document and which is used for approval testing).

HI @DaleKramer sir,
you are right. there is info in detail about this project. only 3 company in the have permission to manufacture this f1 halo.

so, FINALLY, can I used pinned joint or fixed join for this project? @rszoeke @jousefm @DaleKramer @BenLewis
if it’s pinned THAN I will change the results image in this post.

With all the supplied info, I personally would use a pinned point…

But how is he gonna decide the dimension of the hole

? Its not mentioned in the pdf

OK SIR ,
I WILL CHANGE THE RESULTS
i am waiting for other thought also.
thank you,
rohit

Call the people who test it, or take a few guesses and see how the diameter affects results ???

According to me, there is no need to give a pin joint as if you closely look at the front end of the halo, you will realize that the contour on the halo’s surface fit perfectly into the clamping surface(like soul mates

) thus restricting all the 6 DOFs. So I don’t think that there will be a drastic affect of changing the current configuration and assigning new constraints. 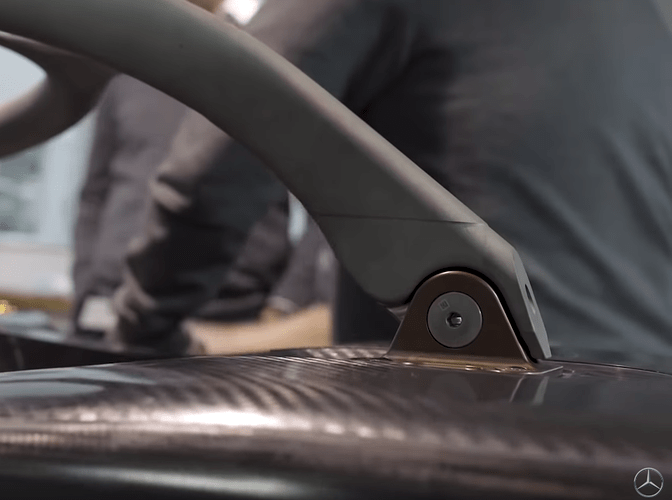