Hi all, I’m having issues with getting a solution on this model:

The error stated is “An error occurred”. I’m not sure what’s going on anymore, and I simply can’t think of anything else. I’m 27 hours in working on this, and it’s simply not working! Any tips?

Very respectfully, and thank you in advance.

You did not create any connections so far that are needed in your case - you have more options:

Brep models for instance implicitly contain contact information afaik. For the rest you would have (for now) have to define the contacts manually but we are already working on a solution for this, also see Automatic Contact Detection.

Hi Jousef! That’s certainly a bummer, but I’m glad that I might be able to work this through! I’ll keep you updated with how the simulation goes.

Hey Jousef, I’m having issues with “unexpected solver issues” or something now, what’s your take on this?

One of the issues that might cause this is that your contacts are defined arbitrarily The master and slave surface have to touch when using contact - to decide which surface is the master and which one the slave you can use this post as a help: Master and slave assignments.

Let me know if you have done it and I will check.

Hi @andycai,
your latest failed run (Run 11) failed due to insufficient memory on the computing instance as mentioned in the error message.

You are using a solver which is not supposed to be used with large systems (probably you selected it by just trying out several changes) and you have a rather large mesh with 1.3 million nodes.

I would propose that you rather use the MUMPS solver, which is the most robust one. If you are lucky, an iterative solver like PETSC might also work and use much less memory then MUMPS with an increased speed.

I copied your project and am trying the above mentioned suggestions. I will let you know once the run finishes.

One of the issues that might cause this is that your contacts are defined arbitrarily The master and slave surface have to touch when using contact - to decide which surface is the master and which one the slave you can use this post as a help: Master and slave assignments .

Hi Jousef, I’m actually unable to reach some of the faces that are supposed to be mated together. Is there a function in Simscale that can let me select different layers of faces (i.e. a face that is blocked by another by geometry)? I’m currently using a bonded contact between surfaces that are adjacent to each other (side by side, not face to face) instead because I cannot select the actual mated surfaces.

Hi @rszoeke, thanks for the input and help! I’ll be running another sim with different contact points this time and see how it goes. Will keep you updated!

Hi @andycai,
there are several options: you can either hide the blocking faces or bodies or alternatively use the function “select other” (or “assign other”) which exactly lets you select through the different layers at the point where the mouse pointer is at the time of the right-click.

Check this video to see how it works:

So I got finally at least a result - but I had to disable the validity checks and ignore the error regarding a singular matrix (by disabling the setting “Stop if singular”). The displacement looks like this: 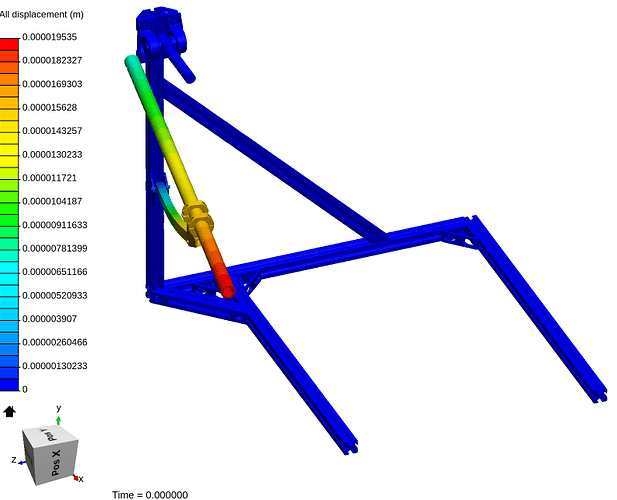 So you can see where the contact is missing.

You can check out ma copy of your project here: https://www.simscale.com/projects/rszoeke/wheelchair_frame_1/

Hey Richard, I’ll try your settings as well. It looks like there was a missing contact point between the main rod and the cylindrical fitting that goes in it? I’ll take another stab at it, will keep you updated. Thank you so much in advance, this means a lot!

Hi Richard, just another question. How can I view the von Mises stress across the model? I don’t see a solution field except for the auto-generated displacement.

You can select the fields in the “SCL” (meaning “scalar”) fields tab: 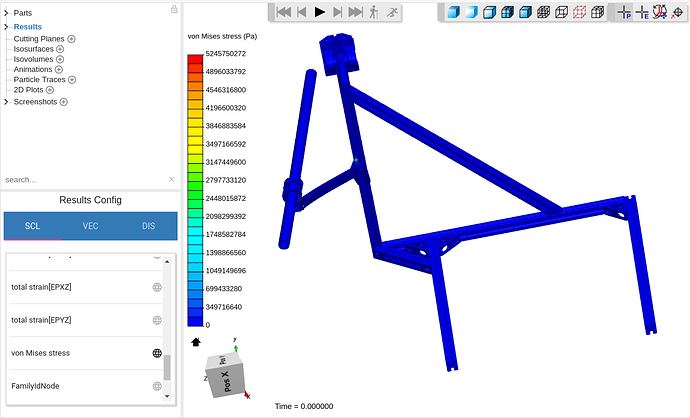 Hi Richard, I have a separate issue now. On paper, we would not expect any of the parts to fail, but the simulation indicates that there are several regions that are at least 3 orders of magnitude higher than the yield strength (300000MPa >> 300MPa). Is there a reason for this?

have you looked that you’re consistent with the units? Also note that one contact is still missing.

I think your model is still not fully set up correctly wrt the contacts as @jousefm mentioned.

There is for example a beam which is not connected at all to the rest of the structure: 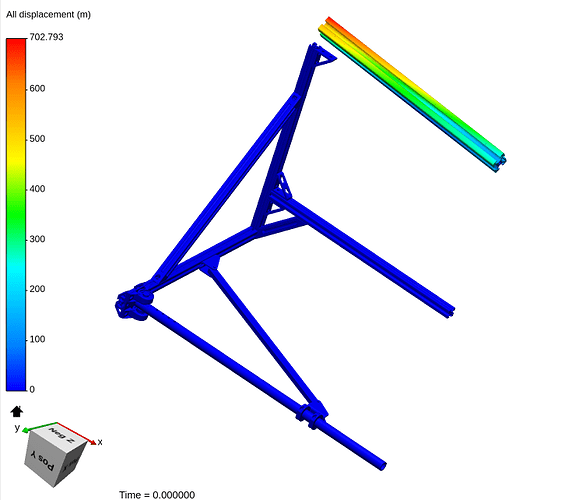 Also the quality criteria of the simulation are currently very low, I would not use these results to draw any conclusions regarding the actual stresses and deformations - there is still a lot to do.
The setup was mainly chosen so you can visually inspect the result to check for unconnected or badly connected parts.

Once all your contacts are correctly set, try to tighten again the convergence and quality criteria to the default values. Then as a final step, use a 2nd order mesh, since a 1st order mesh will underestimate the stresses in your model due to shear locking as you have relatively thin structures and only a single element through the thickness with non-ideal element quality.

Still then, you will probably have certain small regions where your stresses are unphysically high due to stress singularities.
Best,
Richard.