Object in impact analysis does not move despite velocity assignment

(solved) turns out the reason why i got no motion is…i didn’t plot DIS in the results field! I checked all the other details but not this! UX designer take note…

All I want to do is to simulate the impact of my drone prop guard with a concrete wall…after a bunch of wasted core hours my objects just won’t move an millimeter. I’ve compared my settings with several projects: headphone, skull, stamping, and cell phone drop. Just cannot figure out what makes my project different.

main details: object and wall separated by a small gap of ~1.5mm. wall fixed except impact face. Object traveling down X axis at 15m/s which means impact will occur after 0.0001s. I’ve timed the total interval to be 0.001 and the step two orders of magnitude down at 0.00001s. By the end of 0.001s, the object should’ve covered 15mm and well into the impact.

i’ve set the physical contact as close to the other projects settings as possible. I’ve also added constrained motion in y and z, same as the headphone project, even though it is not necessary.

The runs all ended very quickly and the animation shows no movement whatsoever. I assume the problem with my setup must’ve been painfully obviously to everyone else but I just couldn’t figure this one out. Any ideas?

My project is ‘prop guard’Prop guard

Hey @Sanders,
i think, you dont have assignt the gravetydirection. 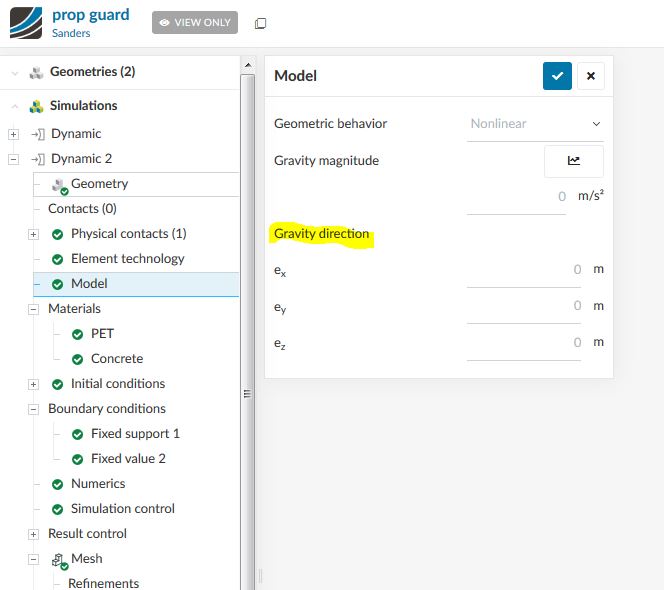 Yes, you are right.

I will look into it and report back.

as a matter of fact I figured it out. there’s nothing wrong with the setup, it was because I didn’t include DIS in my results when viewing the animation…wasn’t obvious to me!