How Can I Find Drag With CFD?

I’m developing a 3d-printed hardpoint for R/C aircraft to be able to carry various payloads and release them in flight. It’ll have screw-points built in so I can use a TBD hardware size (likely M2) to bolt more permanent payloads to the aircraft, such as camera pods. There will be a servo to pull release pins that will allow a payload to fall off the aircraft. I’ll incorporate springs as well because I want to be able to get the payload farther from the aircraft considering that I’ll probably launch parachute-equipped items off of this. I designed this in OnShape, and I’m now testing the part that attaches to the aircraft to determine where I can tweak the design to reduce drag, as this aircraft is intended to have a long endurance. I’ve tried to find the particle trace feature (I think that’s what it’s called, but no luck.) and I’ve also looked through all the various values (k, nut, etc). Does anyone have advice? I’m not sure what to do without particle trace. Also, I’d like to be able to view streamlines, is this possible with a community subscription? Thanks!

In the future its always good to add a link to your project so others can take a look. Just make sure the project is public.

Here is the documentation on how to use the post processing feature within Simscale. There is a TON of info within Simscale so just have a look around.

The new post-processor integrated into SimScale is compatible with all of your CFD and FEA projects and simulations. Try it now!

Particle Traces /Streamlines are available in the community subscription… its under the filter option. You will most likely just need to look at either velocity magnitude or pressure for the particle traces. If you have a bounding box as your wind tunnel the (pick position) is placed on one of the tunnel faces (usually the inlet is good). Just adjust the spacing and size to get the particle trace density you want. 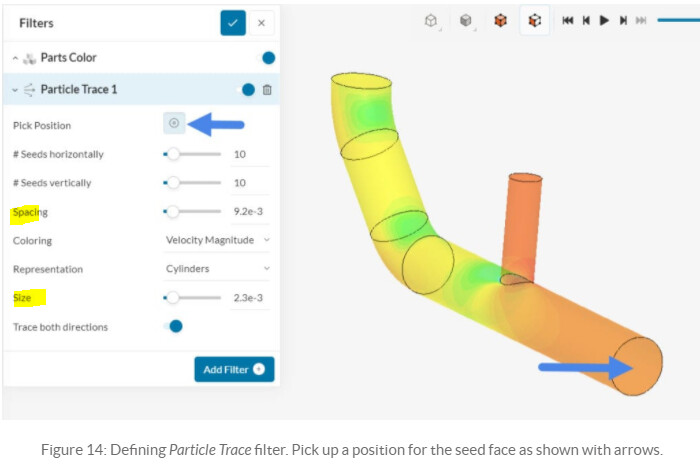 Thanks for your help!