Hi, I have created a project mainly to verify a CFD result on a paper, about flow over a wing. At the end of the setup, I received the following error:

I have checked the other relevant posts on the forum, and the issue is usually that there are more than one solid body in the CAD import. However, I checked my CAD import, and there is only one solid body.

The settings are pretty simple compared to other projects on the forum, so I hope it will be easier for you guys to tackle the issue.

You are getting this error because during the Enclosure you activated the ‘Keep existing parts’ option, so the wing was kept in the model. Try to recreate the Enclosure with this option de-activated , and you should not have any issues. 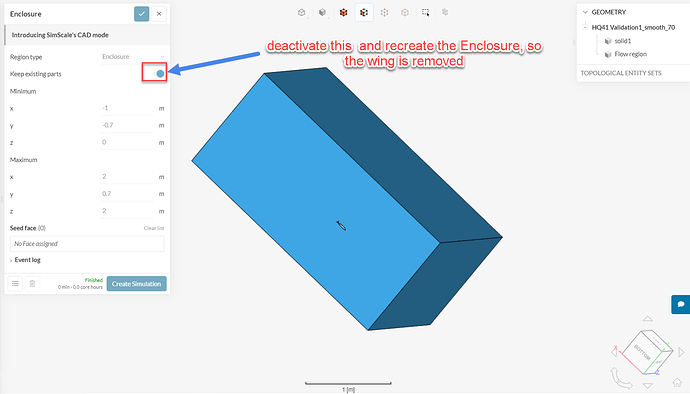 The reason why I ticked “keep existing part” was because the wing would disappear after the enclosure creation, if I don’t tick it.

Or is it normal that I have partial disappearance of the wing?

It should disappear, so only the flow region remains

But after it disappears, I can’t assign the faces on the wing for calculation of force coefficients ^^"

A post was split to a new topic: Defining the lift and drag axis for a case with flow at an angle